Marlins slugger Giancarlo Stanton limped out of the game in the 10th inning with a strained right hamstring. He hit a tapper in front of the plate and clutched his leg just before crossing first base, then fell face-first to the turf.

Miami trailed 3-2 when Greg Dobbs singled with one out in the 15th against Shaun Marcum (0-2), a starter working out of the bullpen after the Mets ran out of relievers. Justin Ruggiano walked and Rob Brantly hit an RBI single to right, with Dobbs barely beating the throw home.

Green followed with fly ball to left field, and Ruggiano scored easily from third. Green also tied the game with a sac fly in the ninth. 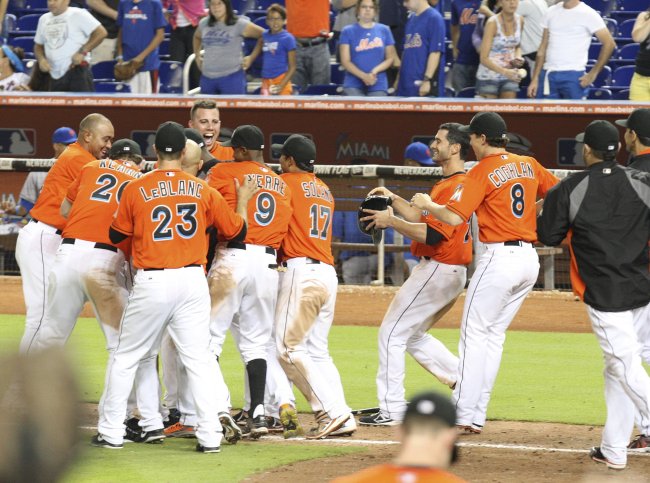 Miami Marlins celebrate after defeating the New York Mets in 15th inning of the game at the Marlins Park in Miami on Monday. (AP-Yonhap News)
The Mets went 1 for 18 with runners in scoring position. The lone hit was Ruben Tejada’s infield single to score the tiebreaking run with two outs in the 15th.

New York’s other runs were driven in by John Buck, who tied a team record with his ninth home run in April.

The Marlins, last in the majors in runs, went 2 for 13 with runners in scoring position and grounded into five double plays.

Lucas Duda doubled with one out in the 15th against Jon Rauch. Following a groundout, Ike Davis was intentionally walked, and both runners advanced on a wild pitch.

That left first base open with the pitcher on deck, but Marlins manager Mike Redmond decided to pitch to Tejada. He hit a grounder into the hole at shortstop and easily beat the throw as Duda came home.

New York closer Bobby Parnell was hurt by a defensive lapse and blew a save by allowing a run in the ninth, which prevented Matt Harvey from improving to 5-0.

Buck, playing in Miami for the first time since being traded by the Marlins after last season, hit a long two-run homer in the fourth off Jose Fernandez.

Harvey, who went only 5 1-3 innings, gave up one run and a season-high seven hits. He threw a career-high 121 pitches, the last of which was a 96 mph fastball.

With the Marlins trailing 2-1, Ruggiano led off the ninth with a double against Parnell. Center fielder Collin Cowgill, a ninth-inning replacement, misplayed a shallow fly hit by Brantly and let it drop for a single that advanced Ruggiano to third.

Green followed with a sacrifice fly to tie the game. Parnell blew a save for the second time in four chances.