A lot of them, anyway.

Boosted by plenty of road rooters, the South Korean rookie turned in his best performance yet and the Los Angeles Dodgers defeated the New York Mets 3-2 Thursday on Andre Ethier’s tiebreaking single in the ninth inning.

“I was aware there are a lot of Korean Americans here in New York,” Ryu said through a translator. “It was definitely encouragement.”

A large Korean neighborhood is just one subway stop away from Citi Field, and Ryu had a lot of vocal support while holding the Mets to three hits in seven innings. He said the warm welcome was “a big strength for my pitching.” 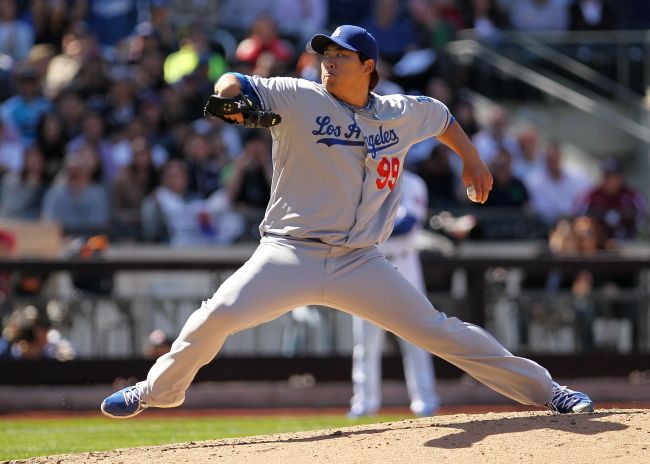 Ryu Hyun-jin of the Los Angeles Dodgers delivers a pitch in the first-inning against the New York Mets at Citi Field in the Flushing neighborhood of the Queens borough of New York City on Thursday. (AFP-Yonhap News)
Also encouraging to the Dodgers was the key hit by the slumping Ethier off left-handed reliever Scott Rice.

“Over the years, there’s been a lot of talk about him not hitting lefties,” manager Don Mattingly said.

After Ryu and Mets starter Jeremy Hefner each left with no-decisions and the score 1-all, the Dodgers won a game decided by the bullpens.

Nick Punto opened the ninth with a double off Scott Rice (1-1) and moved to third on a grounder to the right side by Adrian Gonzalez. After an intentional walk to Matt Kemp, Mets manager Terry Collins visited Rice on the mound.

The left-handed Ethier put the Dodgers ahead with his hit, and Juan Uribe drove in another run with an infield single for a 3-1 lead.

“Just hope to get ‘Dre turned in the right direction,” Mattingly said.

Ike Davis led off the Mets’ ninth with a home run against Brandon League. But League, who gave up a ninth-inning lead Wednesday in a game the Dodgers lost in the 10th, closed for his sixth save.

Ryu turned in his longest outing of the season. He struck out eight and walked three, bouncing back from a rough outing in Baltimore.

“My biggest takeaway from that last game was the first pitches. Today, I was able to effectively put the count to my advantage.”

The 26-year-old lefty blanked the Mets on one single until the sixth. A leadoff walk to Ruben Tejada, a single by Daniel Murphy and a wild pitch on a breaking ball Ryu bounced set up David Wright’s tying sacrifice fly.

Ryu gave up a two-out double to Marlon Byrd before striking out Davis to keep the score tied at 1.

Hefner began the day with a 7.07 ERA and pitched his best game of the season, too. He limited the Dodgers to three hits in seven innings, striking out four and walking three.

“It’s well noted that I was struggling, and to go out and throw seven innings when the bullpen needed it and give us a chance to win the series, that was all good things,” Hefner said.

The Mets put runners at first and second with no outs in the eighth against Jansen before he struck out Wright, retired Lucas Duda on a fly and fanned Byrd.

“He kind of geared it up a notch,” Mattingly said.

The Dodgers scored in the first when leadoff man Carl Crawford was hit by a pitch and Kemp hit an RBI single.