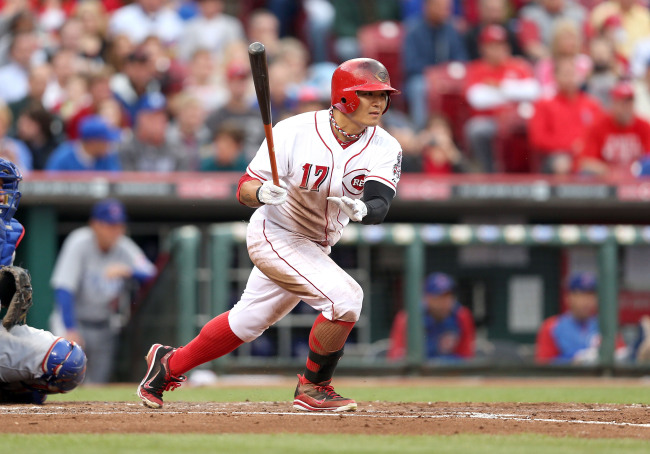 Cincinnati Reds outfielder Choo Shin-soo hits a single against the Chicago Cubs on Tuesday. (AFP-Yonhap News)
CINCINNATI (AP) ― Starting pitcher Carlos Villanueva raised his arm toward a clubhouse attendant and twisted his hand, asking him to turn down the blaring music so he could hear reporters’ questions.

At least there was music.

The Chicago Cubs blew another late lead Tuesday night, but found a way to recover. Carlos Marmol gave up the tying run in the ninth before Darwin Barney bailed him out with a homer in the 10th inning for a 4-2 victory over the Cincinnati Reds.

For once, the Cubs could celebrate the ending of a close game.

“We’ve got music on,” Villanueva said. “That’s a good thing.”

Usually, close games end up badly for the Cubs.

They blew a two-run lead in the 13th inning of a 5-4 loss on Monday night. A day later, Villanueva turned a 2-1 lead over to the bullpen with one out in the ninth and Choo Shin-soo on second base.

Marmol, who lost the closer’s job after a rough first week, has pitched well in non-save appearances. Manager Dale Sveum said before the game he’s been impressed by the performance, but wasn’t ready to make Marmol the full-time closer just yet.

Instead, he was going to go by pitcher-batter matchups to finish games. He had one of the best ones in his favor in the ninth.

Joey Votto was 1 for 15 career against Marmol with nine strikeouts when he came to the plate. This time, he singled up the middle, scoring Choo to tie it at 2.

Once he got there, he kept going.

“We haven’t done a great job early on this season.”

Ellis got four hits and drove in four runs. He hit his 100th career homer in the fifth inning, then connected for a tiebreaking, three-run shot with two outs in the seventh.

Ellis had three RBIs on Sunday at Baltimore when the Dodgers stopped a six-game losing streak. He had not homered since Sept. 20 until tagging the Mets in the series opener, and is now batting .348 this year.