[ The Korea Herald – Send E-mail ]
[Newsmaker] Substitute holiday system stirs controversy
By Korea Herald
Published : Apr 22, 2013 - 20:10
Updated : Apr 22, 2013 - 20:42
Businesses and politicians are clashing over plans to implement a substitute holiday system, under which employers would be required to give employees a day off during the week when a public holiday falls on a Sunday.

The bill for revising related regulations was approved by the Security and Public Administration Committee’s review committee on Friday, and will be raised in the National Assembly’s plenary session this month. 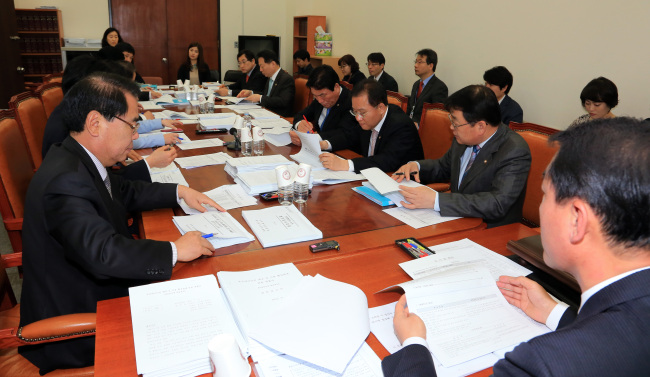 The members of the National Assembly Security and Public Administration Committee discuss bills on Monday. (Yonhap News)
The development has rattled the business community. The pro-business lobby Korea Employers Federation has moved against the bill, saying that it will cost local corporations more than 32 trillion won ($28.5 billion) a year.

The KEF estimates that businesses’ combined annual labor costs will rise by 4.3 trillion won, while their output will drop by as much as 28.1 trillion won if the change is implemented. According to the KEF, two public holidays will fall on Sundays each year until 2022.

The claims were immediately rejected by politicians, who argue that the additional holidays will do more good than harm to the domestic economy.

Speaking in a radio interview on Monday, Rep. Hwang Young-cheul of the ruling Saenuri Party said that the basis of KEF’s claims was unclear and that substitute holidays would have significant benefits.

“In 2010, a study by the Korea Culture and Tourism Institute estimated that the substitute holiday system would create social economic benefit of 24.5 trillion won and 106,835 new jobs,” Hwang said.

Regarding claims that the system could lower the income of day-laborers, short-term contract workers and independent business owners, Hwang said that the majority of workers favored the system, citing the results of a survey conducted by a local online portal site.