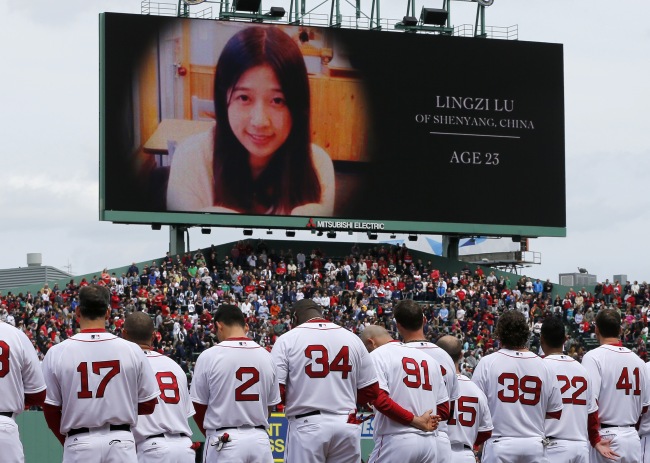 Boston Red Sox players pay tribute to Boston Marathon bombing victim Lingzi Lu on Saturday. (AP-Yonhap News)
BOSTON (AP) ― David Ortiz has been in the middle of some of Fenway Park’s greatest moments. None of them seemed more important to “Big Papi” than his role in one Saturday afternoon.

Ortiz helped the Red Sox honor the victims and the survivors of the Boston Marathon bombings then played in his first game since last summer, a 4-3 victory over the Kansas City Royals capped by Daniel Nava’s three-run homer in the eighth inning.

“I try to take the positive side of things and ride with it,” Ortiz said, sitting at a table in an interview room. “But I wanted to win this game badly.”

The Red Sox wore white home jerseys with “Boston” on the front instead of the customary “Red Sox.” The shirts will be auctioned off for a fund to support victims of the bombings.

Kansas City players and staff wore a “B Strong” patch on the front of their jerseys. Neil Diamond sang Red Sox favorite “Sweet Caroline” before the bottom of the eighth.

“I think today was different because we haven’t been through what we’ve been through this past week,” Ortiz said. “Driving around and looking around at people’s faces, it was a very emotional day here just looking at those guys that were injured by those bombs going off and watching the news nearly every day, it was painful, very painful. Today I could see people opening their chest and letting it go.”

The 37-year-old Ortiz injured his right Achilles tendon running the bases on July 17 and appeared just once in Boston’s final 72 games, against the Royals on Aug. 24.

Ortiz was bothered by inflammation in both heels during spring training and didn’t play in any exhibition games. He was 2 for 4 in his return, tying the score 1-all with a sixth-inning RBI single off James Shields.

“Knowing everything that went into the day for the city, for us to get the win, it came in a special way, special fashion,” Nava said. “It made it all that more important.”

Clay Buchholz (4-0) allowed eight hits in eight innings, struck out six and walked one. Andrew Bailey allowed Lorenzo Cain’s leadoff homer over the Green Monster in the ninth, his fourth hit of the game, then got his third save when Alex Gordon hit a game-ending groundout with two on.

Orioles get past Ryu, Dodgers

BALTIMORE (AP) ― Nolan Reimold played in only 16 games last season, so he can be forgiven for needing a little time to get back in the swing of things with the Baltimore Orioles.

On Saturday, Reimold showed just how good he can be when healthy and playing at his best.

Reimold homered and hit a tiebreaking two-run double in the eighth inning as the Orioles rallied to beat the Los Angeles Dodgers 7-5 in the first game of a split-doubleheader.

Surgery on a herniated disc put an abrupt end to Reimold’s 2012 season, and he understandably got off to a drab start this year. But he’s hit home runs in two straight games, and the left fielder doubled his RBI total with three on Saturday.

With the score tied at 5 in the eighth, Chris Davis hit a one-out double off Paco Rodriguez (0-1) and Ronald Belisario walked J.J. Hardy on four pitches. After a passed ball and an intentional walk loaded the bases, Reimold sliced an opposite-field liner down the right field line.

“I challenge anybody to stand up there and try to hit that ball down the right field corner,” Showalter said.

Reimold said: “It feels good. It’s been a slow start to the year. I had nowhere to go but up, so it’s good to put together a big win and feel like I contributed to it.”

Playing in Baltimore for the first time since 2002, the Dodgers took a 4-0 lead in the second inning. But South Korean left-hander Ryu Hyun-jin couldn’t hold the advantage, and Los Angeles ended up absorbing its fifth straight loss.

Darren O’Day (2-0) got two outs in the eighth and Jim Johnson worked a perfect ninth for his seventh save.

Hardy homered and drove in three runs for the Orioles, and Davis had three hits and scored three runs. 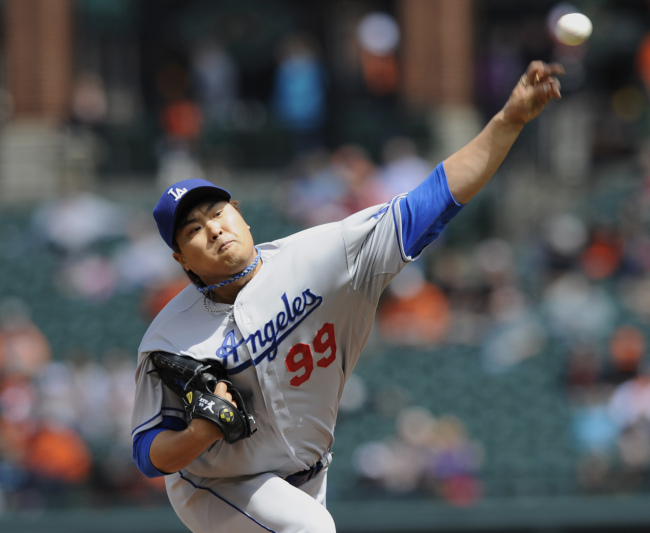 Los Angeles Dodgers starting pitcher Ryu Hyun-jin delivers against the Baltimore Orioles on Saturday. (AP-Yonhap News)
Ryu gave up five runs and eight hits in six innings, walking two and striking out six. “I can’t really make any excuses. I wish the outcome was better,” he said through a translator. “But I’ll come back and do better next time. I’ll just consider it a big learning experience.” 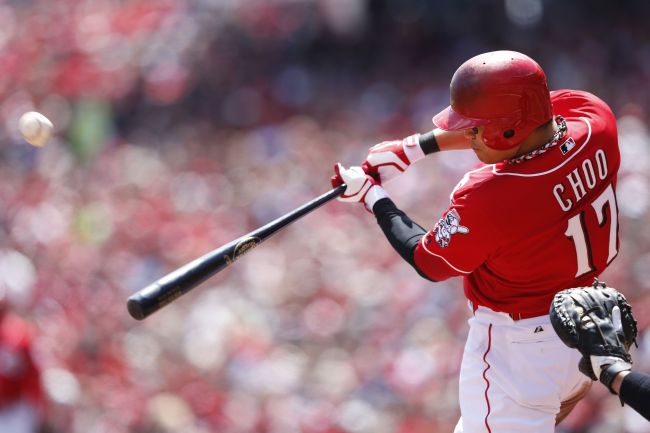 He did just that with a game-ending sacrifice fly in the 13th inning, giving the Cincinnati Reds a 3-2 victory over the Miami Marlins on Saturday.

Facing Steve Cischek (1-2), Miami’s seventh pitcher of the game, Choo Shin-soo led off the 13th with an opposite-field liner down the left field line that bounced into the stands for a ground-rule double, his sixth time on base in seven plate appearances ― he walked three times.

Zack Cozart sustained an apparent right-hand injury while trying to bunt, getting hit on his index and middle fingers with the pitch. X-rays were negative, he said after the game.

Cesar Izturis pinch-hit for Cozart and moved Choo to third with a fly ball to center field. Joey Votto was intentionally walked, and Phillips lofted the fly to center field.

“It’s a beautiful thing when you get the game-winning sacrifice fly on your bobblehead day,” said the Reds’ second baseman, who leads the team with 20 RBIs. “It took long enough. I’m tired as hell. I didn’t want it to take that long. I was happy with the win. Choo gets us started. I try to finish it.”