Tamerlan and Dzhokhar Tsarnaev, ethnic Chechen brothers who arrived in the United States about 10 years ago, used to be seen riding bikes and skateboards on the street in Cambridge, Massachusetts, where they lived.

Authorities in the United States are turning their investigation of the two quiet and athletic brothers to a possible motive for the twin bomb attack that killed three people including an 8-year-old boy, and injured more than 180 others. 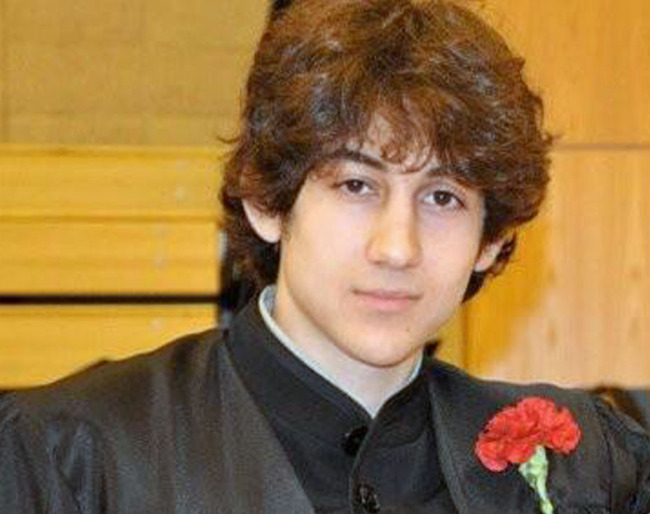 Dzhokhar A. Tsarnaev, poses for a photo after graduating from Cambridge Rindge and Latin High School. Tsarnaev has been identified as the surviving suspect in the marathon bombings. (AP-Yonhap News)
After a murder at the Massachusetts Institute of Technology campus and a wild shootout through the streets of Watertown over the weekend, Tamerlan is now dead and his younger brother, Dzhokhar, is hospitalized and in custody.

Religious extremism might be a motive. This is what authorities so far know about the two young men.

Tamerlan was married to a Boston woman, Katherine Russell, from a Christian family, and the two had a 3-year-old daughter. The 24-year-old Russell had converted to Islam.

Dzhokhar, 19, attended the prestigious Cambridge Rindge and Latin School and had a place on the wrestling team.

Dzhokhar attended a school in the capital of Dagestan, a predominantly Muslim republic in Russia’s North Caucasus. The young men’s uncle said they had been born in Kyrgyzstan.

Dzhokhar’s brother, 26-year-old Tamerlan, who was a martial arts and boxing enthusiast, and had even aspired to fight on the U.S. Olympic team. Tamerlan was killed during the police shootout in Watertown.

Tamerlan was identified in footage of the bombing as the suspect in the dark baseball cap. He was reportedly arrested in 2009 for assaulting a girlfriend.

Despite assurances by former friends and neighbors that the brothers fitted in, Tamerlan wrote in a photo package that appeared in a Boston University student magazine in 2010: “I don’t have a single American friend. I don’t understand them.”

A YouTube user bearing the name Tamerlan Tsarnaev had posted a series of religious videos on the site. One extolled the so-called “prophesy of the Black Banners of Khurasan,” which has been embraced by al-Qaida.

Other videos included those of the Australian Muslim preacher Feiz Mohammad, who preaches against the evils of Harry Potter.

The fact that Tamerlan posted any Islamist-related material on his YouTube site has intrigued terrorism analysts. Al-Qaida and other terrorist groups have instructed recruits to fly below the radar and not to do anything that would attract attention from authorities.