[ The Korea Herald – Send E-mail ]
Phillies and Reds game suspended due to rain
By Korea Herald
Published : Apr 17, 2013 - 20:09
Updated : Apr 17, 2013 - 20:09
CINCINNATI (AP) ― The Philadelphia Phillies and Cincinnati Reds managed only two singles apiece on Tuesday night, staying scoreless until their game was suspended because of heavy rain in the middle of the ninth inning.

The game will be picked up at the same point on Wednesday at 5:30 p.m., before the teams play the finale of their series no earlier than 7:10 p.m.

Phillies reliever Phillippe Aumont was warming up to start the bottom of the ninth when heavy rain prompted the umpires to call for the tarp. They decided to suspend it after 43 minutes with more rain headed for the area.

Left-hander Aroldis Chapman pitched the top of the ninth and retired the three Phillies he faced. Chapman has allowed only three hits and no runs in his eight appearances. He has fanned 13 in 7 1-3 innings. 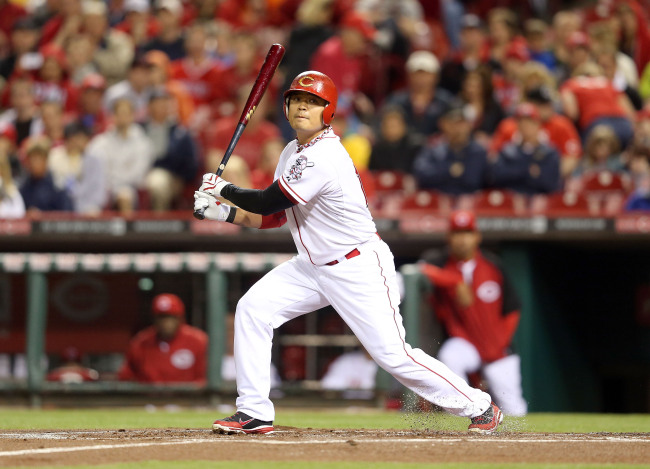 Choo Shin-soo of the Cincinnati Reds swings at a pitch during the game against the Philadelphia Phillies at Great American Ball Park in Cincinnati, Ohio, Tuesday. (AFP-Yonhap News)
Pitchers dominated on a rainy night. A storm moved through after both teams finished batting practice and delayed the start of the game by 1 hour, 20 minutes. Rain returned intermittently and became steady in the fifth inning, then heavy in the ninth.

Philadelphia’s Kyle Kendrick and Cincinnati’s Homer Bailey were stingy, allowing a pair of singles apiece before leaving. They got strikeouts and let their infielders do the rest of the work.

It was a virtual day off for the outfielders, with a total of only four fly outs through the first six innings.

Bailey gave up two singles, didn’t walk a batter and matched his career high with 10 strikeouts, the fourth time he’s reached the number. He also fanned 10 during his 1-0 no-hitter in Pittsburgh on Sept. 28.