[ The Korea Herald – Send E-mail ]
Renault Samsung out to recapture Koreans’ hearts
By Korea Herald
Published : Mar 31, 2013 - 20:01
Updated : Mar 31, 2013 - 20:01
Renault Samsung is out to recapture the hearts of Koreans, this time with a compact SUV crossover and the SM5 XE TCE that it rolled out at Seoul Motor Show this week.

The cars were distinctively cool, and reflected the promise the carmaker, which has performed weakly over the past few years, is making anew to consumers all over the world and in Asia.

The number of reporters who packed the Renault Samsung showroom was, if anything, testament that the company was ready for a comeback.

“Featuring a fashionable and sophisticated design and the best fuel efficiency and value in its class, the QM3 will start and lead Korea’s brand new crossover vehicle market with this unique offering of a crossover SUV,” said Francois Provost, chief executive of Renault Samsung Motors. 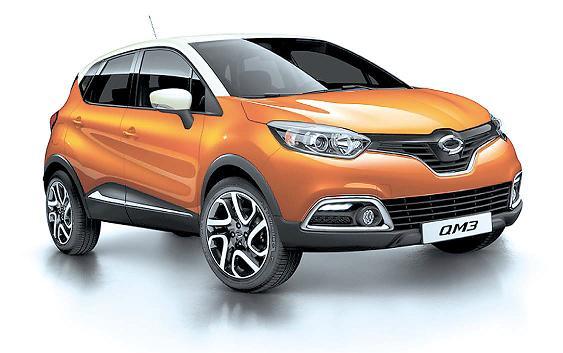 The QM3 crossover SUV
The QM3 was inarguably Renault Samsung’s flagship model for this show, being an urban and sporty crossover that is all about practicality, and is compact without losing its design edge.

The QM3 crossover ― going by the name of Captur in Europe ― is the first car that Renault Samsung has unveiled since the QM5 in 2007. Sales are scheduled to start in Korea in the latter half of this year.

The SM5 XT TCE is another powerful car Renault Samsung introduced with hopes to rev up its sales.

This particular model will be the first model featuring the high-tech direct-injection turbocharged engine developed by the Renault-Nissan Alliance in Korea.

“This turbocharged gasoline direct-injection engine ensures a great 190 horsepower and better fuel efficiency of 13 kilometers per liter, which we believe will draw keen attention in the local mid-size segment,” Provost said.

The SM3 Z.E. was another newsmaker at the Renault Samsung show. The electric-powered car will start sales as the nation’s first such vehicle in the small and mid-size segments.

The carmaker proudly called it the “essence” of its high technology.

On Friday, the carmaker signed a memorandum of understanding with the Environment Ministry and other industry partners to expand the use of electric vehicles in Korea.