[ The Korea Herald – Send E-mail ]
N.K. readies missile forces after B-2 bomber flights
By Shin Hyon-hee
Published : Mar 29, 2013 - 20:35
Updated : Mar 29, 2013 - 20:38
North Korean leader Kim Jong-un ordered his missile forces to be on standby Friday in protest against the United States’ use of nuclear-capable stealth bombers during its joint military drills with South Korea.

The communist ruler convened a rare “urgent operation meeting” at the Supreme Command slightly past midnight to discuss the strategic rocket unit’s mission of a firepower strike, according to the official Korean Central News Agency.

He signed a plan on technical preparations of missiles, instructing them to be “ready to fire so that at any time they could strike the U.S. mainland and its military bases in the Pacific including Hawaii and Guam, and in South Korea,” it said.

“The U.S.’ flying of B-2 stealth strategic bombers over the South shows once again that its hostile acts against the North has reached a reckless level, going beyond the stage of simple threats and blackmail,” Kim was quoted as saying at the meeting.

The young leader called the bombers’ entry to the peninsula an “ultimatum to wage a nuclear war,” vowing to retaliate against any aggression.

The heated rhetoric follows a series of threats since the U.N. Security Council imposed a new batch of sanctions and Seoul and Washington kicked off their ongoing Key Resolve and Foal Eagle exercises early this month.

Pyongyang threatened an all-out war after the U.S. mobilized B-52 strategic aircraft that can also carry atomic bombs during the drills and the allies unveiled their new contingency plans to better counter North Korean attacks last week. 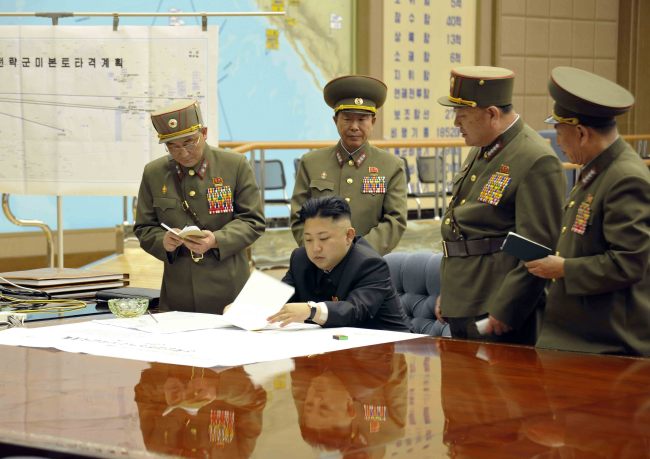 North Korean leader Kim Jong-un is seen at an urgent operation meeting on the Korean People’s Army’s Strategic Rocket Force’s performance of duty in a photo released by the North’s Korean Central News Agency. (Yonhap News)
On Wednesday, the North severed its military hotline with Seoul, fueling fears of a shutdown of the Gaeseong Industrial Complex and subsequent detainment of South Koreans there.

The inter-Korean industrial zone nonetheless continued to operate normally, with hundreds of officials and workers entering, departing and staying in.

Seoul’s Defense Ministry said Kim’s latest order is seen as a “follow-up” to Tuesday’s announcement that he put its military and artillery units into the “No. 1 combat-ready posture” for attacks on the South and U.S.

“The North appears to have taken additional steps on missile forces. South Korean and U.S. intelligence are intensively monitoring if there are preparation movements for short-, mid- and long-range missiles,” spokesperson Kim Min-seok told a regular briefing.

The Unification Ministry urged yet again the regime to cease saber-rattling and come forward to work together with the international community.

“As I have repeated many times, no country on the planet including South Korea intends to launch an armed attack or use military force against North Korea,” spokesman Kim Hyung-suk said.

As tensions spiraled by the day, Washington stressed that its unprecedented dispatch of B-2 stealth bombers was not directed at provoking Pyongyang but part of regular training.

“The North Koreans have to understand that what they’re doing is very dangerous,” U.S. Defense Secretary Chuck Hagel told reporters in Washington, adding that the military practice was nothing “extraordinary.”

“But we have to take seriously every provocative, bellicose word and action that this new, young leader has taken so far since he’s come to power.”

During his first phone conversation with Seoul’s Defense Minister Kim Kwan-jin on Wednesday, Hagel reaffirmed the United States’ “unwavering commitment” to the alliance and defense of South Korea including extended deterrence capabilities.

“So it just continues this pattern that we’ve had that the North Koreans, by these provocative actions they’re taking, by their rhetoric, are only isolating themselves,” she told a regular briefing.

“They are the ones that are causing us to have to ensure that our defenses are appropriate and strong both for ourselves and for our allies.”