The government, military and private sector have been beefing up their chiefly passive defense to safeguard the country’s heavily intertwined computer networks from outside intrusions.

While probes are under way to determine the latest attackers, officials and experts pinpointed North Korea as the likely suspect in light of past cases and patterns and its recent threats.

Pyongyang’s increasingly sophisticated and diversifying hacking skills pose greater risks to South Korea, one of the world’s most wired countries with high broadband speeds and penetration levels, they say.

“It makes sense because that way it can inflict greater damage, economic and social, at relatively low costs. That’s why they prefer this and they will continue to do so.”

Pyongyang is believed to have had jammed global positioning system signals on South Korean civilian flights and ships from last April to May and hacked government and corporate websites and commercial banking systems in 2009, 2011 and 2012. 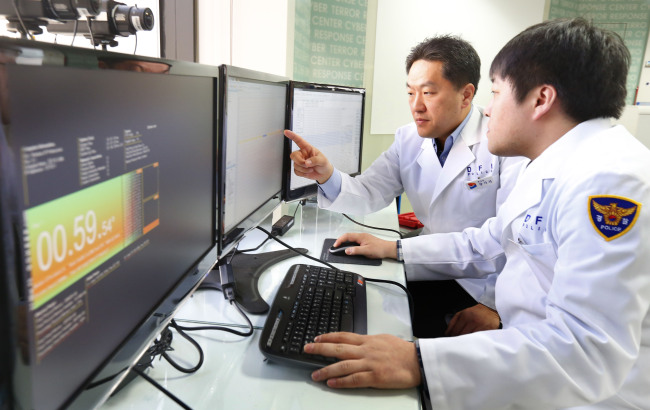 The regime appears to have been striving to boost asymmetrical warfare capabilities due in part to its likely low chance of winning a conventional war with the South equipped with more cutting-edge weapons.

With electronic break-ins, it may also dodge accusations as their origins and tactics are usually technically difficult to be traced back, said Kim Jae-yeop, a visiting professor at Hannam University’s Graduate School of National Defense Strategy in Daejeon.

“Despite various benefits, the rapid development of and our growing dependence on electronic information communications technology may make us vulnerable to cyber attacks even from those whose technology is relatively less developed because there are loopholes,” he told The Korea Herald.

U.S. Forces Korea Commander Gen. James Thurman said in October the regime had a “significant” and growing cyber warfare capability. He said last March it was training a rising number of “sophisticated computer hackers” to orchestrate cyber infiltrations and attacks.

As North Korea’s cyber threats surge in size and power, the South Korean military set up a special cyber command to devise strategies and steer related operations in 2010. It opened a cyber warfare school last year in partnership with Korea University, taking about 30 new students every year.

The Defense Ministry said last June it was seeking to elevate the rank of its cyber commander to major general from brigadier general and double the number of staff to 1,000. It installed a cyber protection policy team in 2011.

Yet some experts are calling for additional measures such as regular training courses with the military and a sharp expansion of the specialist team and budget.

In contrast, North Korea is known to operate an elite unit of around 3,000 hackers and cyber experts under the Reconnaissance General Bureau, a prime intelligence body.

Lee Dong-hoon, a professor at the Korea University Graduate School of Information Security, said in June that the military-centered country runs a 3,000-strong cyber army under the direct control of leader Kim Jong-un.

That marks the world’s third-largest electronic warfare forces after Russia and the U.S.

Shin In-gyun, president of non-profit Korea Defense Network, has said Pyongyang has been delving into electronic warfare since the early 1980s and now has up to 5,000 specialists.

“While our capabilities primarily sustain their defensive nature, we should not only focus on handling attacks when they occur but also be capable of striking back when the culprit becomes clear,” he said.

“We also should boost our own cyber capabilities and cooperation with the U.S. and participate more actively in global discussions to formulate rules on cyber warfare.”