The (North) Korean Central News Agency (KCNA) monitored in Seoul said Kim stressed the importance of the sector in a speech given at the national meeting of light industrial workers held on Monday in Pyongyang.

“Kim Jong-un in his speech said that the light industrial front along with the agricultural front are the main fronts on which efforts should be focused in the drive for building an economic power and improving the people’s living standards,” the official news wire service reported. 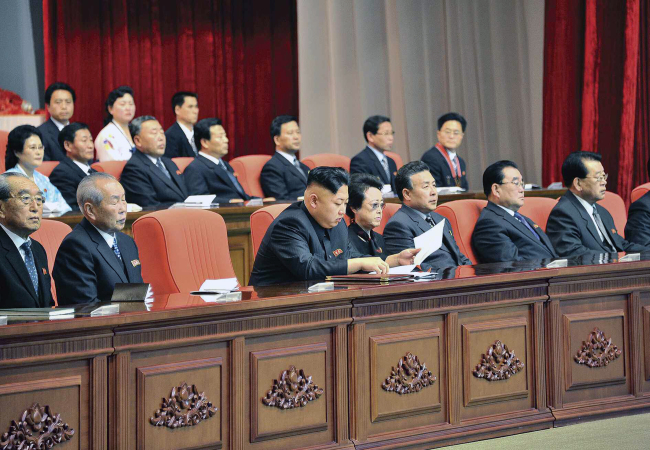 North Korean leader Kim Jong-un attends a national light industry gathering in Pyongyang on Monday. (Yonhap News)
It also said that Kim pointed out that light industry is the main target for the concentration of the country’s resources, even under heightened tensions surrounding the Korean Peninsula, the media report said.

The North detonated a nuclear device on Feb. 12, and threatened to turn Seoul and Washington into a “sea of fire” for playing a leading role in pushing for fresh sanctions at the United Nations and for conducting joint military drills.

The KCNA said Kim emphasized the goal of the country is to prevent a new war from breaking out on the Korean Peninsula and to strive for economic growth under peaceful circumstances to highlight the superiority of Pyongyang’s socialist system and hasten eventual unification of the two Koreas.

The news report said the leader pointed out that there is a pressing need to locally produce materials and parts for the light industrial sector and ordered the development of the chemical sector and build-up of regional manufacturing capabilities.

“It is necessary to make the most effective use of existing production potential to radically increase the production of consumer goods and push forward with the modernization of light industry, and make it the world’s standard,” the leader told people gathered at the meeting.

Kim, moreover, called for creating up-to-date managerial and corporate strategies, and doing away with the inflexible attitudes of workers and managers in the light industry field.

North Korea watchers in Seoul said the North Korean leader’s latest remarks on light industry mirrors what he said in the New Year’s address on Jan. 1. The light industry gathering is the first to be held in 10 years. The last time such a gathering was held was in late March 2003.

Chang Yong-seok, senior researcher at the Institute for Peace and Unification Studies at Seoul National University, said the emphasis on light industry at a time when Pyongyang has placed the country in battle mode is a sign that the North does not want to ignore the economy or its impact on the people.

Others such as Yang Moo-jin, political science professor at the University of North Korean Studies, claimed that the KCNA report and the sudden holding of the meeting may be a sign that Pyongyang wants to end the current confrontational stance with the outside world and focus on its economy.

“This may be an indirect message (of reconciliation) sent to South Korea, the United States and China,” the expert said.

Reflecting this view, an official at the unification ministry, who declined to be identified, said Kim’s interest in light industry may be due to the lack of progress made so far, and the need to invite foreign capital to get various commercial projects moving.

“The North can’t do this by itself so it may be seeking outside cooperation,” he said. (Yonhap News)