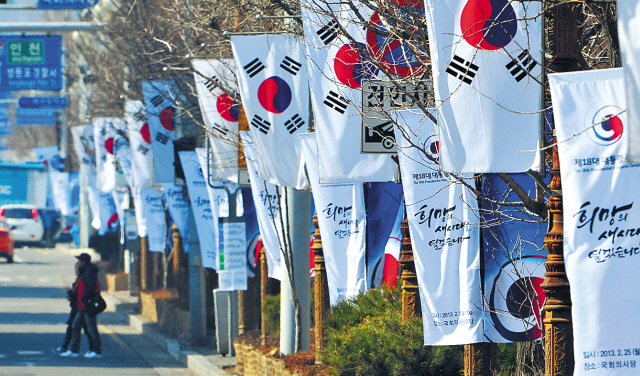 Taegeukgi, the national flag of South Korea, and commemorative flags adorn the trees in front of theNational Assembly, Yeouido, Seoul, where the presidential inauguration takes place Monday. (Yonhap News)
The Park Geun-hye administration launches Monday to steer the country through a critical juncture at home and abroad. It is tasked with realigning diplomacy and security in the face of North Korea’s volatile nuclear threat and achieving the new national paradigm of balancing growth and welfare, all in the midst of acute ideological division domestically.

Park took over power from former President Lee Myung-bak as of midnight Sunday in accordance with the Constitution, assuming all the legal powers of a president including supreme command over the military.

The inauguration ceremony for the nation’s 18th president will be held at 11 a.m. Monday at the National Assembly before some 70,000 attendants including 145 foreign envoys to Korea and 22 top-level government delegates from overseas.

The conservative government launches with the aspiration to shift the national paradigm ― from quantity-oriented economic growth to quality-focused growth, and from a unilinear cause-and-effect theory of growth leading to welfare to a recursive chain between the two.

Contrary to its ambition, its start is one of the shakiest yet, with none of Cheong Wa Dae or the government ministries being close to finishing their structural and personnel handovers.

Already under the scrutiny of the information-savvier public, and pinched by the opposition’s questioning of its commitment to national unity, Park’s new administration has many obstacles to overcome and much to prove.

The daughter of former iron-fisted ruler President Park Chung-hee becomes the first female and first unmarried leader to enter Cheong Wa Dae in Korean history and is faced with obdurate calls to break from her father’s legacy.

A sharp ideological divide between the conservatives and the progressives represented in last year’s close presidential race remains one of the biggest hurdles for Park, in order to follow through her pledge to accomplish a government and society based on “trust.”

“I will not be forgetting 48 percent of the people,” Park had said in her meeting with the leaders of the two major political parties on Feb. 7, referring to those who had voted for her rival Democratic United Party candidate Moon Jae-in.

Under the banner of “creating an era of people’s happiness,” the administration will operate with 17 ministries (provided the government reorganization plan is approved by the National Assembly), championed by the three control towers on economy, security and science each assumed by the deputy prime minister, presidential national security office chief and future creation and science minister.

Park’s government has the backing of the ruling Saenuri Party with a majority of 153 seats, but will be kept in check by the 127-strong DUP and other minor opposition parties. 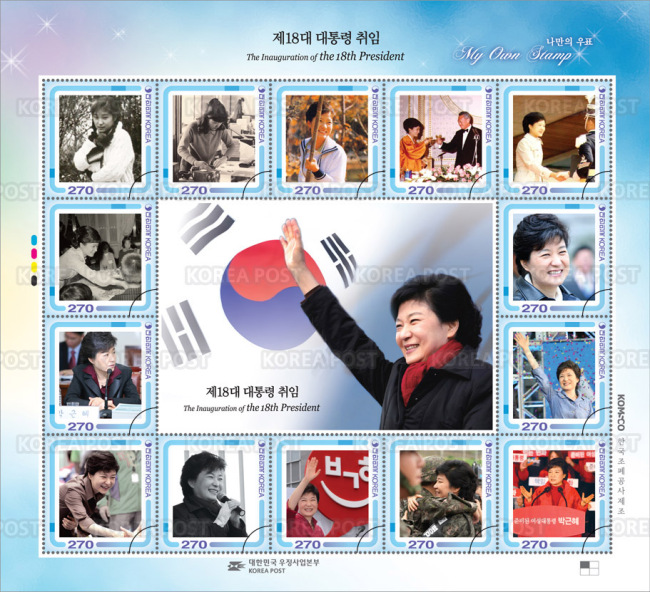 A set of stamps to commemorate the inauguration of the 18th president is revealed by Korea Post. The stamps show pictures of Park Geun-hye from her childhood to present. (Yonhap News)
The new president, who has 15 years of experience in politics, envisions a nation beyond the miracle of industrialization and democratization.

For instance, with a mission to “break through the crisis of today and prepare the growth for tomorrow through innovation-based economy,” the newly formed Ministry of Future Creation and Science must synchronize the dispersed knowledge and ideas to scion the R&D accomplishments onto practical industries.

With her economic team members considered to be traditional conservatives, Park must also charge through the critics’ concern that her policy may divert away from her initial platform of economic democratization.

Park is yet to detail how to finance her welfare projects, as her plans for now that include a stronger audit of annual expenditures, uncovering the underground economy or stricter application of non-taxable reduction benefits are considered theoretical.

With the new term “principled-based market economy,” Park’s economic team members assure that they remain committed to creating a fairer economy by implementing measures to lower household debt, prop up small and mid-sized businesses while better controlling the irregularities of the bigger market players.

Robust security is promised to fend off North Korea’s provocations while a trust-building process with Pyongyang will be promoted at the same time for lasting peace on the peninsular.

Her security and foreign affairs team faces formidable challenges in the next five years, with heightened tension and knottier dynamics in the region, where North Korea has been gutsier as China continues its rapid surge as a world power, the U.S. stresses greater emphasis on Asia and Japan turns more stubbornly right-wing.

This year is to be the first year that the major players including the U.S., China, Russia, Japan and South Korea have recently had a leadership change around the same time.

While Park faces daunting challenges ahead, her administrative methodology is questioned by many, as seen in the less than 50 percent of approval ratings shown in recent surveys.

The transition committee gave a glimpse into the new administration’s operation, where the officials were seen to be diligent, focused and modest, but also secluded, passive and restricted.

While they managed to fend off speculation, their plans and decisions were incessantly met with rigorous criticism due to a perceived lack of communication.

Park’s highly secretive personnel decision-making style as led her to be accused of making “sealed appointments,” which even led to the resignation of her first choice for prime minister Kim Yong-joon.

Her choices of Cabinet members are being scrutinized, as they are seen to lack diversity, while many of them face the familiar allegations of technical and ethical misdeeds such as tax evasion or plagiarism in the past.

Such designations as Cho Won-dong as senior economic presidential secretary and Hyun Oh-seok as finance minister have also triggered questions over Park’s commitment to wider welfare due to the nominees’ past stances centered on growth and selective welfare.

Publicity on Park’s determination to uphold all of her presidential pledges backfired when adjustments were made for practicality, such as her promise to give full medical support to patients with four major diseases, or a pledge to sharply reduce the military service term which sparked concerns over its potential impact on the national defense posture.

After constantly allowing opportunities for the opposition forces to tackle her “uncommunicativeness,” Park is still awaiting a parliamentary decision on her government reorganization plans, while the confirmation hearings for her Cabinet nominees remain delayed.

Now, as she finally enters Cheong Wa Dae, Park said she was determined to speedily implement her plans.

“I have seen many cases in which (measures) fail to be implemented after losing the momentum in the beginning. We should push through them with a resolve to implement most of them within the first three or six months into (the administration),” Park had said during a debate held at the transition committee on Feb. 18.

The transition committee has clarified that over 20 policies would start to be implemented within the first year in office. For that, around 150 relevant bills are to be submitted to the Assembly.

Such policies as free childcare for children aged five years and younger or the college tuition subsidies have already been reflected in this year’s budget.

Environmentally, an agency to supervise chemicals-related accidents will be installed along with a fortified safety management system within this year. A larger number ― from the current 77 to 100 ― of large and small companies will also be subjected to the “benefit sharing system” that promotes joint research and development this year.

From April, those working at small-sized businesses with a monthly wage of less than 1.3 million won will receive government assistance in paying half of the national pension and employment insurance.

As a preliminary step to opening a one-stop center where citizens can receive job and welfare-related services, an ombudsman will be formed at each city, county and district.

In the cultural sector, the new government plans to develop a “culture happiness index” this year and conduct the regular culture census from next year.

On a wider note, the incoming government in the next five years aims to usher in “an era of people’s happiness” through a creative economy, wider welfare, a safe and united society, and a foundation for national reunification.

It pledges to establish a robust defense posture, fortify defense alliances and cooperation with neighboring countries, normalize relations with Pyongyang through a trust-building process, envision a peace cooperation structure in Northeast Asia, expand cooperation with Eurasia and buttress advances into emerging markets.

The government also pledges tailored employment and welfare, as well as better security from crimes and measures against climate change and crisis situations.

To improve social cohesion, Park promises to compensate victims of past authoritarian rule and to promote balanced regional development and decentralization of power.