[ The Korea Herald – Send E-mail ]
Koreans fight back against marathon working hours
By Korea Herald
Published : Feb 19, 2013 - 20:26
Updated : Feb 19, 2013 - 20:26
A growing number of South Korean corporations are turning their backs on a workaholic culture once seen as indispensable but increasingly viewed as unhealthy, unproductive and inefficient.

Long working hours, often followed by intense late-night drinking sessions with the boss, have long been a feature of the Korea Inc. that transformed a war-ravaged nation into Asia’s fourth-biggest economy in a matter of decades.

Rapid development has brought new values and new priorities, with employees demanding a better work-life balance than the previous generations who were told their patriotic duty in pulling the country out of poverty. 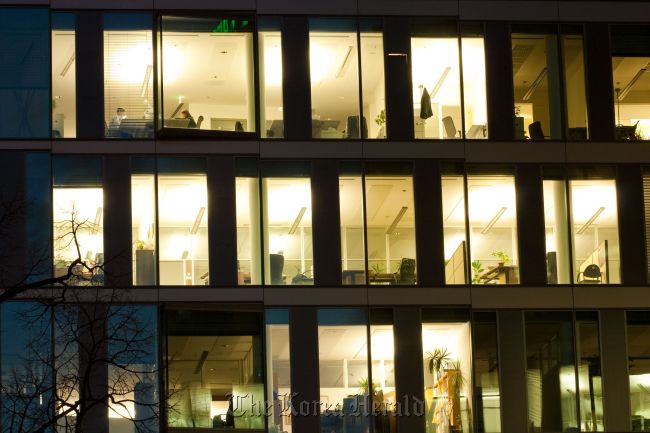 Office building windows with lights on (123RF)
For more than two decades, Yie Jong-man, a 53-year-old bank manager in Seoul, could only dream of sitting down at home to a family dinner after work.

“I used to work until 10, 11 at night or even later because there was so much work to do, or simply because my boss wouldn’t go home,” said Yie, who has worked for the state-run Industrial Bank of Korea since 1986.

“I couldn’t spend enough time with the family when my two kids were growing up. They were nearly always asleep when I went home,” he told AFP.

But things started to change in 2009 when the IBK, the fourth largest bank by assets, adopted the unprecedented policy of shutting down all office computers at 7 p.m. to ensure people went home.

The “PC off” rule was a success and many other banks are set to follow suit this year.

In 2011, an average South Korean worker put in 44.6 hours a week, the second highest after Turkey among members of the 34-nation Organization for Economic Cooperation and Development.

But the exhausted workers ranked only 28th in terms of productivity.

And a report last year by consulting firm Towers Watson showed that only 17 percent of South Korean workers were “highly engaged” in their work, far lower than the average of 35 percent among the 28 advanced nations surveyed.

The impact of long-working hours on family life has been partly blamed for a sliding birthrate that has made South Korea one of the world’s most rapidly aging societies ― a trend that is expected to take a heavy economic toll.

A recent U.N. report showed those aged 60 or over will account for 39 percent of the South’s population by 2050, up from 17 percent last year, while the size of its youth population will be halved by 2060.

“Part of the reason for the falling birthrate is both men and women here absolutely lack the time for proper childcare,” said Lee Sam-sik, researcher at the The Korea Institute for Health and Social Affairs.

“There’s an urgent need to change our culture of overwork in order to boost the birthrate, strengthen the long-term competitiveness of the country and, more than anything else, make this country more livable,” Lee said.

During last year’s presidential election, all the main candidates vowed to cut overtime and improve people’s quality of life.

The winner, Park Geun-hye, promised to bring working hours down to the OECD average by 2020.

And even the giant family-run conglomerates, or “chaebols”, that dominate the national economy have started to make concessions ― albeit slowly.

The South’s top automaker Hyundai Motor agreed to cut working hours for some 30,000 plant workers and to dump its decades-long graveyard shift, 10 years after negotiations started with the labor union.

And 35 banks and other financial firms ― with a combined workforce of more than 100,000 ― recently agreed with the industry’s umbrella union to embrace the “PC off” rule by the end of 2013.

“Some say fewer work hours means less profits, but I don’t believe that is the case anymore,” Sung Nak-jj, spokesman for the Korean Financial Industry Union.

“We used to be working long hours in a constantly exhausted and unfocused state... Now is the time to do something to achieve more sustainable, effective and humane growth,” he told AFP.

As the clock passed 6:30 p.m. at the IBK branch in the busy shopping district of Dongdaemun, Yie Jong-man and the other managers started calling out to their staff: “Everybody, please wrap things up! Let’s go home!”

Those wanting to work after 7:00 p.m. need special permission from their supervisors, whose performance is evaluated on not only how much revenue they earn but also how early their subordinates go home.

“Now I can have dinner with my wife... but I wish I had done that when my kids were little. Now they are all grown up,” Yie said.

“Things will be better for younger fathers at our bank... I guess that’s how we become a better nation not only in economic terms but in cultural and social terms.”