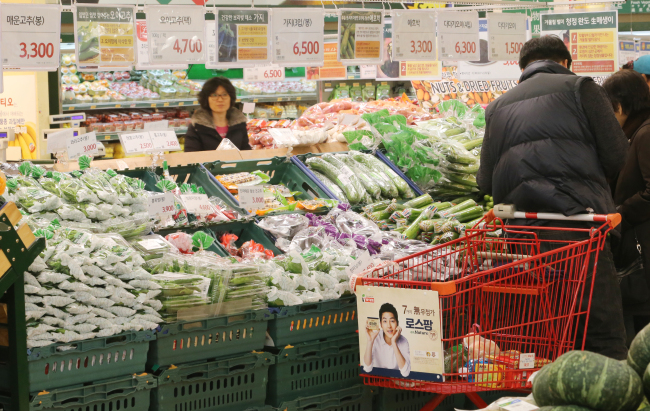 Shoppers pick up groceries at a supermarket in Seoul. (Yonhap News)
It is a common, recurring complaint within Korea’s middle class: The cost of the most essential goods, especially food, is too high. Fresh produce, particularly fruit, can be remarkably expensive, leading Koreans to spend a greater portion of their income on sustenance than people in many other rich nations. In 2010, people here spent 15 percent of their household income on food, compared to 6.6 percent in the U.S., 7.5 percent in Singapore, 9.7 percent in the U.K., and 12.1 percent in Hong Kong.

Food inflation also tends to be high by international standards, often being compounded by sudden spikes in prices around Chuseok and Seollal or during periods of bad weather.

Last year, the cost of food here rose 4 percent, compared to the OECD average of 2.7 percent. By recent measures, this was a good year: 2011 saw food inflation reach 8.1 percent, while the year before that the figure was 6.4 percent.

Part of the problem, say free market advocates, is Korea’s overreliance on trade protectionism. While Korea has dismantled many trade barriers in recent years, signing eight free trade agreements since its first with Chile in 2004, it is still only ranked the 34th-freest economy in the world by the U.S.-based Heritage Foundation. Naturally, trade is hugely important to feeding the people of what is a small, extremely densely populated country: The nation imports some 70 percent of its food.

Professor of economics at Yonsei University Kim Chung-ho said that the nation should dismantle existing trade barriers and remove excessive regulations on the food industry to help lower prices.

“Korea’s food prices are notoriously high compared to other countries except Japan,” said Kim, who is also the former head of the Center for Enterprise.

“It’s because of two reasons; one is trade barriers and the other is regulation on commercialization and modernization of agriculture.”

Kim recommended liberalizing the market to allow private entrepreneurs to participate in agricultural production and distribution. He pointed to Harim Corporation as an example of modernization that could boost the food industry and help keep food costs down.

“Economies of scale must be exploited in agricultural production. Harim Corporation, which has grown from (being) a young farmer boy into a big chicken business, is a good example. Because of Harim, chicken products have become internationally competitive both in price and quality,” he said, adding that resistance from farmers was the biggest obstacle in the country to lower food prices.

Yet, according to some experts, the problem of high food prices is something of an international problem — requiring international solutions. Last year, the U.S., one of the world’s biggest grain producers, saw its worst harvest in 24 years, helping send the U.N. index of cereal prices up 17 percent in July that year. In the summer of 2008, a threefold rise in grain prices worldwide precipitated a food crisis that led to unrest in many parts of the world.

Hwang Eui-sik, a researcher at Korea Rural Economic Institute, said that the high prices of grains, which are not subject to high import tariffs by Korea, need to be tackled through international efforts.

With more traditional processed foods like kimchi, the country’s small scale of production and the labor intensity involved likely contribute to higher costs, said Hwang. Greater cooperation between sellers and growers and centralization of production could be one way of keeping prices down.

“Although it is restrictive, building up an agricultural product production town and developing contracts between food companies and farms could be an option to lower traditional processed food prices,” he said.

Farms and sellers, of course, are just part of the picture. Whether it is food imported or produced here, how it gets to the dinner table is another factor in determining what the consumer pays. Some observers identify a complex chain of distribution as keeping food prices high.

“I think there is a problem of distribution, between the producers/farmers and consumers,” said Kim Chul-kyoo, a professor at Korea University and author of “Globalization and Changing Food Politics in South Korea.”

“So-called middlemen make the food prices high, which (makes) both producers and consumers suffer. There should be a structural change in how food flows from farm to table. Shorter supply systems should be introduced. Food co-ops and other forms of short supply will help consumers access good-quality food at fair prices.”

The fact that the country’s snack prices have nearly tripled in the past five years tells us almost everything. It is commonplace for people to be astonished at the extortionate prices of groceries. It is time for the government to take action in order to reduce food prices. There are mainly two solutions: restricting collusion among merchants, and ratifying FTAs (free trade agreements) with a number of countries.

Whenever farmers, fishermen, and other manufacturers are interviewed about the unstable prices of foods, all they say is that they cannot understand why the prices of foods are so high. They often mention that middlemen are the people who should be pointed out as the cause of high food prices. Likewise, it can be said that the production costs have not changed a lot in a few years, but middlemen, especially large grocery companies, just keep raising the food prices through collusion. It is essential for the government to regulate middlemen who are joining forces to rig an increase in the price of food.

On top of that, ratifying FTAs with other countries will contribute to lowering the price of food. The main reason why people support ratification of FTAs is because since tariffs are taken down, foods from other countries can be imported at a low cost. However, if we look carefully into the fundamentals of FTAs, we can notice that we can also benefit from FTAs in the aspect of lowering local food prices.

If more and more people purchase grocery goods from other countries because of the goods’ low price, local grocery companies receive a great incentive to lower the price of food to beat the competition. In this light, ratifying FTAs with other nations can play an essential role in cutting food prices in Korea.

To speak frankly, the issue of lowering food prices cannot be solved immediately. It is next to impossible for the government to suddenly stop companies from fixing prices and ratify FTAs with others. However, it is crucial for the government to move toward the goal step by step. By doing so, the problem can be settled and everyone in the country will become capable of serving an abundant meal.

The prices for fruit and vegetables that are “in season” are okay, but as soon as “the season” ends the prices skyrocket. That’s where Korea would be wise to allow more imports of fruits and vegetables. Prices would be lower and everyone would eat healthier foods.

Food in restaurants is really cheap, but buying in supermarkets is expensive. If you live alone, it is often cheaper to eat in restaurants than cook at home. Why do Korean companies oppose imports of products that are not grown or produced in Korea? Many tariffs make little sense.

To be honest, all foods seem overpriced in supermarkets. Coming from the U.K., I wouldn’t say that Korea should be seeking out the cheapest possible prices (horsemeat in lasagna!) but more should be done to ensure prices are not being set by the chaebol. This is surely happening and the government needs to do more to challenge it.

First find out why they are high. If, as is likely, the chaebol are keeping them artificially high, then they should be prosecuted and punished. The government should introduce agencies to monitor prices in supermarkets to ensure that price fixing is not occurring.

FTAs are coming out of Korea’s ears already, with little change in the cost of groceries. FTAs might help, but price fixing is rampant. Happens everywhere, but in a state run by chaebol I can only imagine it is at epidemic levels.