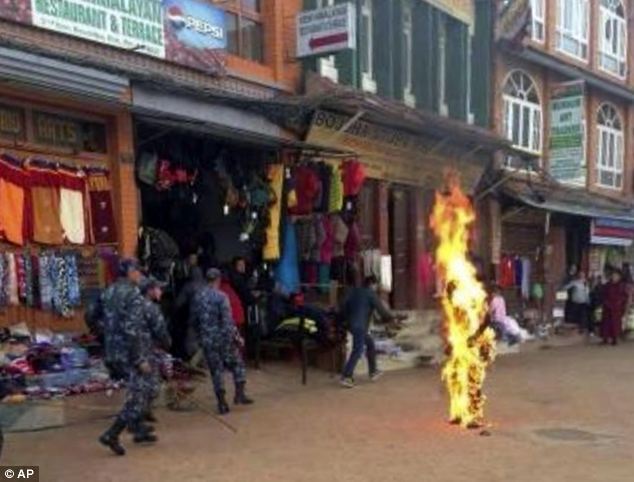 Police rush to a Tibetan monk who set himself on fire at the premises of the Boudhanath Stupa in Kathmandu on Wednesday. (AP)
The cause to “free Tibet” reached a macabre milestone on Wednesday when a Tibetan exile became the 100th person since 2009 to attempt self-immolation in protest against Chinese rule.

According to witnesses, the man in his 20s covered himself in petrol before setting himself alight in the Nepalese capital of Kathmandu. He was taken to hospital where he remains in a critical condition.

Supporters of the Tibetan independence movement say that China’s intolerance of protest forces Tibetans to resort to the most drastic of measures to air their grievances, which stem from China’s 1949 invasion and subsequent occupation of the region. A representative of the Dalai Lama, the spiritual leader of the Tibetans, called the latest self-immolation attempt “very unfortunate” and repeated the spiritual leader’s calls for an end to such extreme forms of protest.

The complexities of the dispute between China and the Tibetans aside, the human dimension to these desperate protests is undoubtedly tragic. While protestors who pay the ultimate price attract attention to their cause, they implicitly glorify suicide, inspiring others to further a cycle of death and despair.

Such acts are also doomed to be futile. Political suicides are unlikely to move a Chinese government infamous for its indifference to human suffering. They are, however, unquestionably devastating for the friends and family left behind. The taking of one’s life is the most final choice possible, and it is a bitter truth that those who leap into the abyss are often in the most desperate state of mind. Buddhism, the majority religion of Tibetans, can be interpreted as forbidding the taking of one’s life for this very reason.

The Tibetans hope for a better future in a land they see as rightfully theirs. But a political act that negates the most precious thing there is, life itself, is no way to inspire such a future.