[ The Korea Herald – Send E-mail ]
[Newsmaker] K-water recognized by Thailand
By Seo Jee-yeon
Published : Feb 6, 2013 - 20:42
Updated : Feb 6, 2013 - 20:56
Despite a growing dispute over alleged flaws of the four-river restoration project here, the nation’s water control and management capability gained recognition overseas as the Korean consortium was selected as a priority negotiation partner for all 10 major water management projects being pushed by the Thai government on Tuesday.

Among the bidders, Korea, Japan and China have been in a tight race for the 10 projects worth 12 trillion won ($11 billion), which is intended to advance Thailand’s infrastructure for water resources management and to prevent massive flooding by 2018. 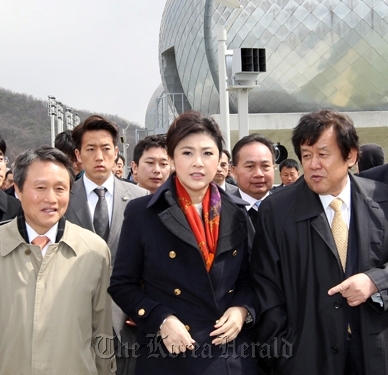 Thai Prime Minister Yingluck Shinawatra (center) visits the Ipo Weir in Yeoju, Gyeonggi Province, during her visit to Korea in March last year. (Yonhap News)
Six bidders, including the Korean consortium led by the state-run Korea Water Resources Corp., or K-water, passed the first round of screening. But the Korean participant was among the top two performers and was named as a priority negotiation partner for all 10 projects along with ITD Power China JV, a Thai-Chinese joint venture.

“The result gives a green light for Korea to win some of the projects. The Korean team will make all-out efforts to prepare for the final proposal by March 22,’’ an official from the Ministry of Land, Transport and Marine Affairs said.

If Korea wins the projects in April, it will be the first time for it to use its water management know-how overseas.

The Korean consortium joined the bidding race as a latecomer last year, backed by its track record in the 22 trillion won ($20 billion) four-river restoration project which began in 2009.

The massive construction project, however, has become a hurdle for Korea to export its water management skills as the Board of Audit and Inspection said last month that it had found flaws in the planning and implementation courses of the project.

The Land Ministry soon refuted the announcement of the independent governmental agency, but the inspection on the four-river project is expected to continue with the upcoming government.

“We believe the Thai government will objectively evaluate competitiveness that the Korean consortium will present, separate from the developments regarding the four-river project,’’ the ministry official said.