The controversy pivots around President-elect Park Geun-hye’s envisioned transfer of the ministry’s trade-related operations to a newly expanded Ministry of Knowledge Economy, which will be renamed the Ministry of Industry, Trade and Energy. 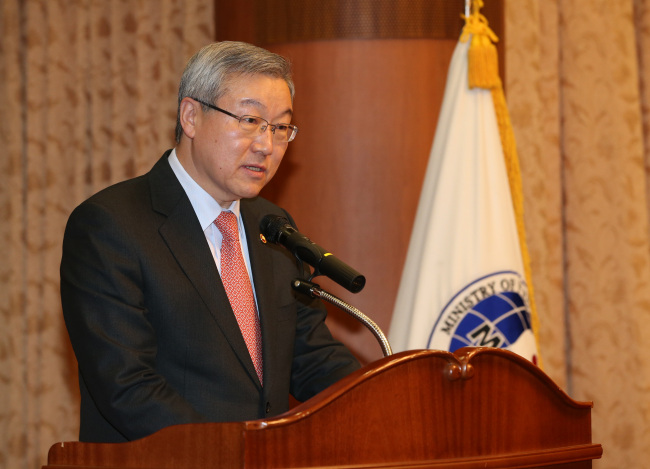 Kim Sung-hwan
After weeks of apparent acquiescence and under-the-table lobbying, Kim stood up against the proposed amendment of the Act on the Appointment and Powers of the Government Delegates and Special Envoys, calling it “shaking the framework of the Constitution.”

Trade roles aside, the foreign ministry must keep the authority to pick government representatives at least to maintain consistency and head off confusion in handling foreign relations, he argued.

Kim’s abnormally tough tone instantly kindled interest from the media, politicians and even his colleagues and junior diplomats. At the same time, it has apparently enraged the leader-in-waiting, who is already grappling with the bungled nomination of her first prime minister, brewing criticism over her airtight decision-making process, North Korea’s imminent nuclear test and other brainteasers.

Ostensibly to contain further protests from other agencies, Park soon rushed her aide Rep. Chin Young to write off his remarks and shoot back. Chin, the transition team’s deputy head and the Saenuri Party’s chief policy architect, billed it “sophistry and ministry egotism,” saying that the foreign minister’s right to appointment is entrusted by president.

Kim may have gone too far by touching on the Constitution. But his vocal opposition should have at last helped quench many foreign and trade ministry officials’ thirst for leadership given his preference of a low-profile and early instruction to stay quiet.

After all it was the timing and logic that went awry rather than his speech’s apparent face-saving effect, given Park’s resolve to push ahead with her original plan.