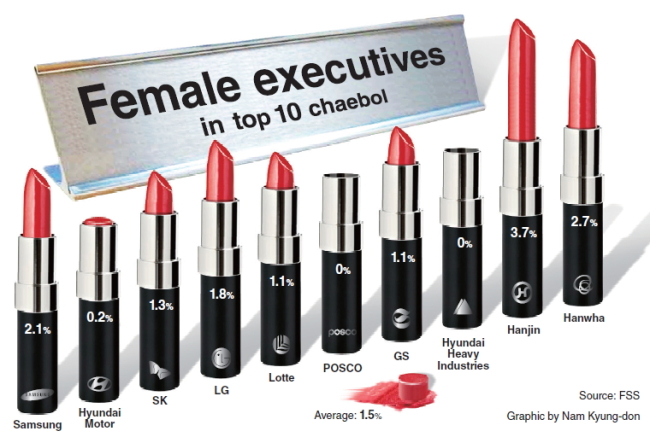 Corporate Korea is still fostering few women executives, according to figures from CEO Score, a website devoted to governance issues at the nation’s top conglomerates.

Women accounted for only 1.5 percent of the of executives at the top 10 industrial groups, reaching 5,201.

This means there were fewer than two female executives for every 100.

The survey was conducted on 93 of the listed affiliates of the groups, and also 94 of their non-listed sister companies.

Samsung led the pack with 39 female executives, but its ratio was only slightly above 2 percent, followed by LG with 1.8 percent.

The number of female executives at companies such as SK, GS, Hanjin and Hanwha remained in single digits.

However, Hanjin had the highest proportion of women leaders at 3.7 percent of its executive workforce, followed by Hanwha with 2.4 percent. This was because these two firms had fewer executives.