This was Korea’s latest and third launch of a rocket carrying a science satellite into space.

Experts, however, said the mission to see large economic returns in space development was only half-complete, given that the Naro was a “joint-venture” rocket with key engine technology provided by Russia. 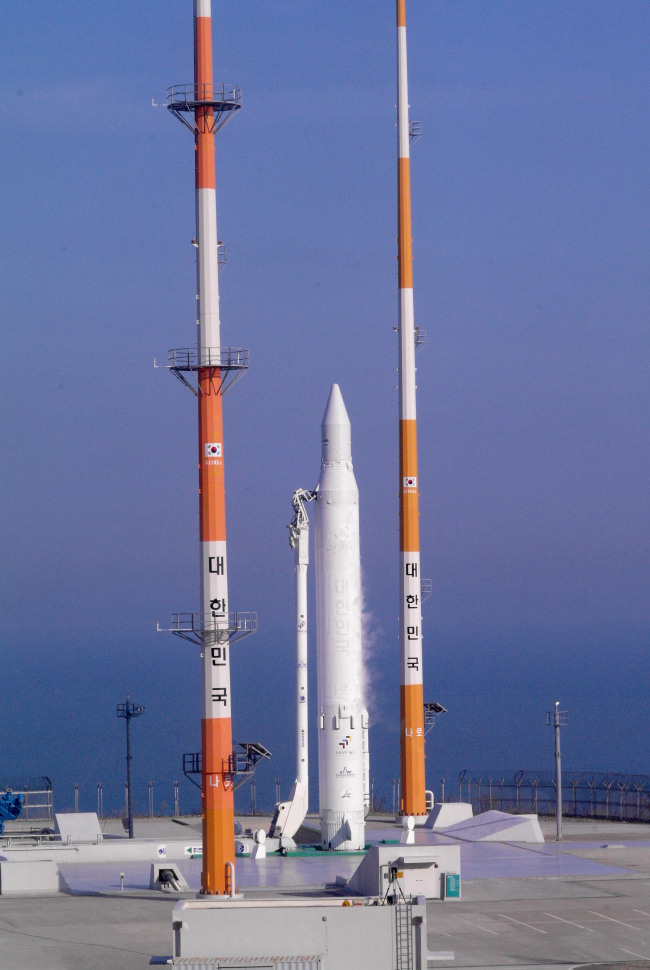 The next step Korea is taking is developing its own indigenous rocket ― the KSLV-2, a three-stage rocket with a liquid-fuel engine carrying an application satellite ― by 2021. The Korea Aerospace Research Institute could push this forward to 2018-2019.

The budget for the KSLV-2 is around 1.5 trillion won ($1.4 billion), and its success would not only improve Korea’s image as a high-tech, knowledge economy, but also place it among the top 10 countries with advanced space programs.

The successful development of the KSLV-2 would be a near equivalent to producing a “Sonata” sedan with its own engine and automation systems, and pave the way to further achieve the capability to manufacture luxury cars, Lee said.

Wednesday’s launch and deployment of a satellite has put Korea in the so-called global space power club, boosting its space and aerospace industry’s market share to 0.6 percent from 0.4 percent, Hyundai Research Institute said.

The Naro rocket, the credit for which mainly goes to Russia for key technology and launch pad engineering, deserves much attention because it shows the progress of KARI, which had to work on this project with a lack of human and capital resources, and collaborative efforts with academics and the aerospace engineering industry.

Consisting of millions of industrial parts and solutions for a single rocket, the Naro signifies the potential of mutual cooperation among a wide range of small, medium-sized and big industries from telecommunications, broadcasting, and electrical engineering to chemicals and machinery.

Imagine what the KSLV-2 would generate for the country economically by launching into space, the last remaining area for scientific research and discovery.

Hyundai Research Institute predicts that Korea’s space and aerospace industries will grow to 5.5 trillion won by 2020, from 2 trillion won today.

The global market for space and aerospace is expected to grow to more than $911 billion by 2020, from some $360 billion.

The opportunity is too good to miss even for latecomer South Korea, whose rocket technology is behind that of North Korea. Its satellite technology, however, is superior. South Korea develops highly advanced satellites for both civilian and military uses that are on par with the U.S. and Europe. With rockets, Korea can further diversify its exports, its main growth driver.

President-elect Park Geun-hye, a believer in science and technology for economic growth, has expressed her desire to speed up the development of the KSLV-2 and other related space projects such as a lunar module for exploration.

“Korea has a plan to send a lunar module by 2025. I want to push this plan forward along with the development of the Korean-made rocket,” Park said.

For further development, Korea’s space program must overcome obstacles such as a small R&D budget, and the lack of human resources and participation from private companies, Hyundai Research and analysts said.

Korea’s 2011 budget for the space program was $208 million, only 0.4 percent of that of the U.S., 6 percent of Japan, and 7 percent of China, according to Euroconsult.