[ The Korea Herald – Send E-mail ]
[Voice] How much tax can Park squeeze out of the underground economy?
By Korea Herald
Published : Jan 28, 2013 - 20:05
Updated : Jan 28, 2013 - 20:05
President-elect Park Geun-hye has made no secret of her wish to oversee big increases in public spending, mostly to fund her vision of a more expansive welfare system. Considering South Korea’s comparatively low level of social spending and the prevailing political wind for increased welfare, Park’s welfare drive by itself could be seen as unremarkable. More notable, though, is her claim of being able to raise the more than 100 trillion won necessary without introducing new direct taxes or raising existing rates. A comparably simple and painless solution is proposed for collecting 15 trillion won of that amount: uncover more of the underground economy.

Park claims that economic activity done off the books amounts to some 372 trillion won each year, or 24 percent of the nation’s gross domestic product, a figure well above the norm for a developed country. The president-elect hopes to raise 1.6 trillion won annually by regularizing 6 percent of the shadow economy, and a further 1.4 trillion won through increased scrutiny of high earners. 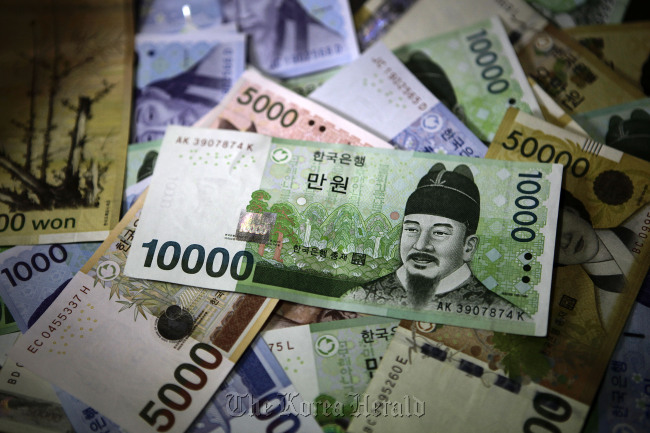 South Korean won banknotes of various denominations. (Bloomberg)
An official with the National Tax Service said the agency was confident that there was a sizable shadow economy to be exploited, but that said it needed greater powers to look into financial transactions.

“We at the NTS know that there is a big cash economy in Korea and various activities to combat that cash economy, but the area in which we don’t have information is in financial information,” said the official who wished to remain anonymous.

“So if the NTS is equipped with some ability to look into financial information more easily, then the prospect of achieving more money, more revenue, will be higher.”

A bill currently pending at the National Assembly would allow the NTS access to information of the Financial Intelligence Unit, which monitors financial transactions suspected of supporting terrorism or money laundering. The bill, however, has faced resistance from the Ministry of Finance and Strategy.

The NTS official would not be drawn on the feasibility of Park’s target for extra revenue, but said the agency was committed to securing the extra funds to meet Park’s pledges.

“I am not sure whether the NTS will be able to make a specific amount of money. A lot of conditions have to be met before we will able to take necessary measures to achieve that amount.”

Some experts, however, believe that Park’s estimate of the size of the shadow economy, and consequently her revenue target, is dubious. Previous estimates of the size of the black market in recent years from think tanks such as the Korea Economic Research Institute and Korea Institute of Public Finance have ranged from 17 to 22 percent of the nation’s GDP.

Woo Seok-jin, an assistant professor at the department of economics at Myongji University, said that previous governments had significantly clamped down on the scale of the black economy already, meaning that Park’s estimate of 24 percent of GDP was likely inflated.

“We (Korea) accepted a system of income deduction for using a credit card, or a so-called cash register system, so if you use cash then you can receive a receipt and that amount can be tax deductible from our income taxes,” said Woo, who co-authored a paper titled “The Effect of Transparency Policies on Shadow Economy: Measurement and Evidence from Korea.”

“… We believe the effort of the government has been successful and most of the income of the self-employed sector has been revealed.”

Woo’s own estimate for the scale of the unreported economy is in the 15 percent range. As a result, he believes that Park can only expect to collect a relatively small amount of revenue in any renewed tax crackdown.

“If the tax officials work very, very hard and review tax return documents pretty thoroughly, they can collect more regional (taxes of) around $6 billion,” he said. “I think that is the maximum. So, based on that fact, President-elect Park’s promise might be clueless.”

Yet, even Woo’s conservative estimate of the size of the black market is high by developed country standards, no doubt adding to policymakers’ temptation to collect untapped revenue. Koreans’ preference for cash, as well as the business culture of “jeobdae,” in which business deals are secured through gifts and entertainment at venues for drinking and prostitution, help create a shadow economy, the scale of which is at odds with Korea’s developed status.

While President-elect Park’s goals may be overly optimistic, there still remains room to increase the effectiveness of the tax code, according to some economists. Seoul National University economics professor Pyo Hak K. said the current system offered little incentive for higher earners to pay their full taxes owed to the authorities.

“If we include in the definition of underground economy those business activities by proprietors who do not file taxes as much as they should, such as doctors, dentists, lawyers, retailers, wholesalers, bar and restaurant owners, accountants, lawyers etc., then these proprietors have no incentives to file honest taxes,” said Pyo. “The reason is because the Korean tax office chases after them (taxpayers) once they file higher income or value-added tax or corporate tax; they do not care whether there is a recession, etc. Once they file a certain amount, they are expected to file higher taxes every year. So they give up and hide their true income.”

Pyo said that this problem could be remedied in part by introducing a reward system for honest tax filers.

“I recently proposed the government introduce a credit system to honest SMEs; if they filed, for example, value-added tax, income tax or corporate tax of, let us say, 1 billion won, they should be given an automatic credit line by their banks, maybe 300 percent (3 billion won) of their tax payment because their actual sales or revenue must be 10 or 20 times higher than tax payments.”

With experts differing on the scale of the black market, it could be that the extent of available revenue won’t be known until after it has been collected. Roh Kee-sung, a professor at the Korea Development Institute who has studied the underground economy, said how much could be realistically extracted from the shadow economy would depend on the efforts of the authorities.

“It is generally reported and known that the size of Korea’s underground economy is about 20 percent of GDP. It is not clear at this point how much additional tax revenue can be extracted from the underground economy. It will be dependent upon how much efforts will be devoted by the tax administration in investigating hidden and disguised transactions and detecting the underreported and concealed tax base. Furthermore, the reaction of concerned taxpayers to tighter tax administration should be taken into account.”

Being an American who spent two months in Korea I noticed that unlike my loud and outspoken Italian-Irish family here in Boston, most families in Korea shy away from talking about sensitive topics. I found ― in my limited experience ― that this practice is most commonly employed by parents and elders when sensitive topics are brought up by young people ― if they are mentioned at all. Topics that could be seen as shameful or undesirable like failing in school, sexual orientation, etc, come to mind. I know that saving face and not talking about difficult topics to avoid family drama is commonplace in Korea and even in America ― everywhere, for that matter, to varying degrees.

My short answer, to reduce the suicide rate, a small step forward would be to abandon the outdated practice of saving face and ignoring unfavorable family discussions, in exchange for listening, loving and accepting the shortcomings of young people. To do otherwise leaves a young person feeling more humiliation, depression and shame ― leaving them with nowhere to turn. Change starts in the home. On the topic of suicide in Korea, this mantra applies as well.

For starters, link educational-related stress and longer working hours to a higher likelihood of this happening.

As a parent of “multicultural” children (i.e., mixed race), our family gets a government stipend for kindergarten fees, to the tune of several hundred dollars a month. I’m not complaining at all; it’s certainly nice ... but we’re not in the typical income bracket of the real target demographic. This piece of welfare is not so much financial support as it is hazard pay for mixed-race kids living in an overwhelmingly (homogenous) society.

Korea has a big problem with “the shadow economy” because many wealthy people are breaking the law and hiding assets. The government should crack down on people who lie on their tax returns and put accounts and property in the names of their family members to avoid paying taxes. Seriously, how can a child own a car or apartment complex?

Also, many hagwon refuse to legally register so they can avoid paying taxes and paying into the health insurance and pension schemes for their Korean and foreign employees. The government should get serious about cracking down on these illegal practices. Hopefully President Park will keep her word and enforce tax laws.