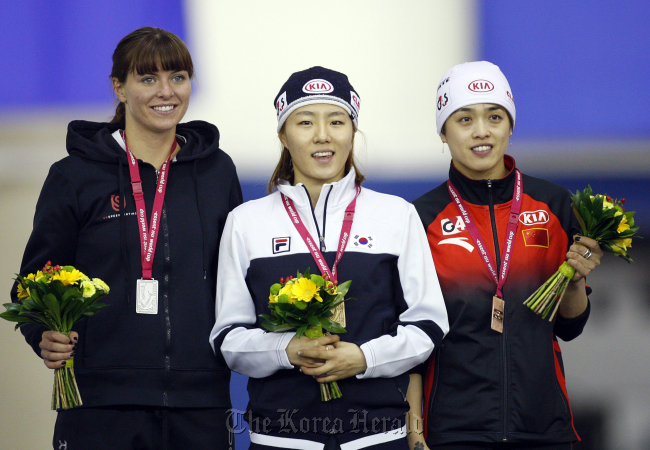 Lee won the Speed Skating World Cup race in Calgary, Canada, on Sunday in 36.80 seconds in the 500 meters, taking 0.14 seconds off the previous record set by Yu Jing of China last January.

A day earlier, she broke the national record with 36.99 seconds, becoming the first Korean female to break the 37-second barrier.

Her record-breaking performance adds to her sweep of all eight World Cup races that she entered in the ongoing 2012-13 season. Now no one is faster over 500 meters than her.

Until last season, the 2010 Vancouver Olympic gold medalist had competed neck-and-neck with her rivals including Jenny Wolf of Germany, Yu Jing and Wang Beixing of China. From this season, however, the Korean went ahead of the pack. She has been top of the podium eight consecutive times.

She now seems to be enjoying her prime this year. She has matured her form as she added international competition experience to her tough physical endurance.

She has developed her skills most prominently in the early part of a race. Lee used to start late or lag in the opening stage, but she seems to have overcome this shortcoming. From this season, she has led her competitors for the first 100 meters. Over the eight races this season, she was slower once than others in terms of the first 100-meter time.

Also, her stellar performance is propelled by her mentality of staying calm and focused.

Before entering the World Cup this season, she reportedly said that she may have failed to set a new record last season because she was too obsessed with breaking a record. She then said she would compete in the race with a focus on the sprint itself.

The Korean record that she set a day earlier may have lifted her spirits: She managed to weather the pressure and succeeded in setting a new world record.

Her world record set at Calgary gives her a psychological boost ahead of her attempt at winning a second straight Games at the 2014 Sochi Winter Olympics.

Lee will next compete in the world sprint championships in Salt Lake City, Utah, from Jan. 26.