[ The Korea Herald – Send E-mail ]
[Newsmaker] BAI railed for delay of report on 4 rivers
By Korea Herald
Published : Jan 20, 2013 - 20:29
Updated : Jan 20, 2013 - 21:08
“The Board of Audit and Inspection should be audited and inspected first,” said a TV talk show commentator on Friday, one day after the state agency unveiled the result of its inquiry of the four-river restoration project.

The BAI called President Lee Myung-bak’s pet project of damming and dredging “seriously flawed.” Poor design left dams with feeble base structures that could cost hundreds of billions of won each year in maintenance, and blocked water flow that could deteriorate water quality and damage surrounding eco-systems, it said. 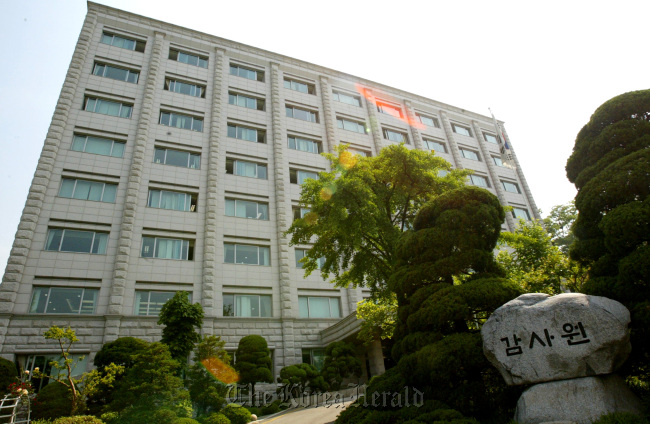 BAI headquarters in Seoul
It was a far cry from its first investigation announced two years ago of the 22.2 trillion won ($20.1 billion) project. The auditor then concluded that “no particular problems were found,” adding the restoration would lead to cleaner water and prevent flooding.

The BAI attributed the differences to the timing and method of inspection. At that time, the project had yet to be completed and the agency looked into only its feasibility and potential impact on the environment. This time around the real results were examined, it said.

But opposition parties and environmental activists offered a different reasoning.

At the time of its first inspection, even independent experts were able to point out evidence of the same problems, they said. It does not make sense that BAI could not even anticipate such problems after its sweeping probe into the detailed plans. Otherwise, such problems could have been prevented, they said.

Four environmental groups claimed in a joint statement Friday that the BAI intentionally ignored, whitewashed or covered up the problems in its 2011 announcement.

The opposition Democratic United Party said the BAI appeared to be shifting gear to curry favor with the next government as it did during almost every government handover.

For example, the BAI conducted an unprecedentedly sweeping probe into the distribution of tax revenues to local governments in 2008. The actual target was said to be the funding of the retirement home of former President Roh Moo-hyun who had stepped down earlier in the year.

In the same year, it conducted an audit into the execution of the inter-Korean cooperation fund, which it had refused to do while Roh was in office. It also failed to make public the outcome of its investigation in 2003 into an alleged illegal cash transfer by former leader Kim Dae-jung’s aides to North Korea until an independent council uncovered the truth.