[ The Korea Herald – Send E-mail ]
[Newsmaker] Top court nominee plagued by allegations
By Korea Herald
Published : Jan 16, 2013 - 19:46
Updated : Jan 16, 2013 - 20:19
The man tapped by President Lee Myung-bak to head the nation’s highest court is proving himself to be a walking encyclopedia of ethical deprivation.

Lee Dong-heub, who was nominated by the president in early January to be the chief justice of the Constitutional Court, faces a series of allegations ranging from unlawful real estate transactions to backroom dealings with powerful corporations.

Records indicate that Lee registered his residence at an address in Seongnam, Gyeonggi Province, in 1995, while actually living in Seoul until 1997, according to Rep. Park Hong-keun of the main opposition Democratic United Party. 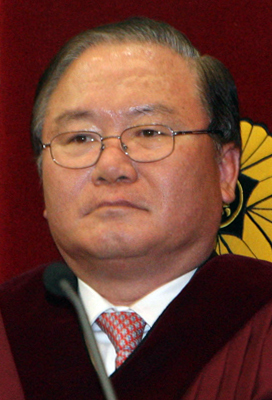 Lee Dong-heub
Park alleges that the false registration was made in order to purchase real estate in the outer Seoul area where land prices were expected to skyrocket.

The Residents Registration Law strictly forbids such false residence registration in order to prevent real estate speculation. Lee explained that because his daughters were in high school at the time, he could not move the family to Seongnam despite being registered as living there.

Lee is also accused of having chummy relations with Samsung Group. Lee’s former colleagues say that during his tenure as a district judge, Lee ordered his subordinates to seek sponsorship from the largest conglomerate in Korea for a year-end dinner involving gifts.

Court records in turn indicate that Lee lowered or nullified penalties against several Samsung subsidiary companies during his tenure as district judge.

In 2003, Lee annulled 9.8 billion won ($9.3 million) of a 9.9 billion won fine levied against eight Samsung subsidiary companies in a ruling.

Lee is also alleged to have made unlawful campaign donations to a Saenuri Party lawmaker in 2007. Lee explained that he made the donation because the lawmaker was a college friend, but the law forbids government employees from making such financial donations to politicians.