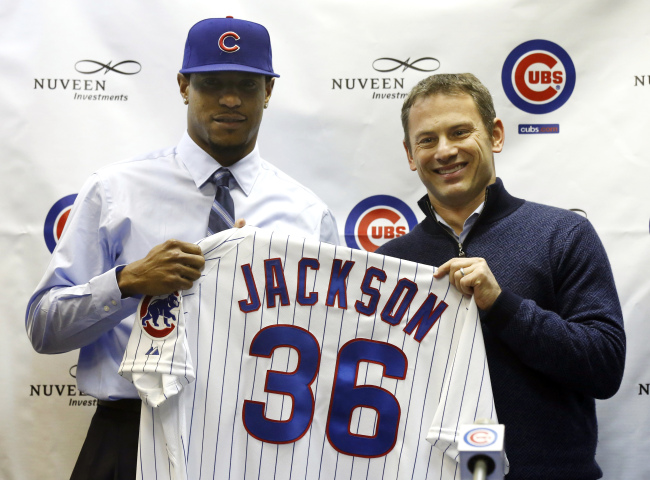 “I think everybody likes me,” he said.

The 29-year-old right-hander might find some stability now that he has a four-year, $52 million deal with the Chicago Cubs.

The team announced the move on Wednesday after reaching an agreement last month, giving the Cubs a durable starter to add to their rotation as they try to dig themselves out from a 101-loss season.

Jackson is now on his eighth team in 11 years, including a run with the crosstown White Sox, and is 70-71 lifetime with a 4.40 ERA. He made the All-Star team with Detroit in 2009 and pitched a no-hitter for Arizona in 2010. He has also played for the Los Angeles Dodgers, Tampa Bay, St. Louis and Washington, going 10-11 with a 4.03 ERA for the NL East champion Nationals last season.

He has made at least 31 starts in each of the past six seasons while reaching double digits in wins and exceeding 180 innings the past five. That includes three straight seasons of at least 199 2-3 innings from 2009 to 2011, and the Cubs believe he will still be effective once they’re ready to contend, which they hope is sooner than later.

“I think we’ve been really consistent in saying the value of every individual season is precious,” general manager Jed Hoyer said. “We want to put a great team on the field every year. We’ve also been clear that we’re building for something we think is going to be very special, and we want to make sure that any free agent signings of this magnitude really fit in with this plan. Like I said, Edwin is 29 years old. He’s already had six consecutive seasons making 31-plus starts. He’s proven his durability. He’s proven his durability. He’s proven his talent, but he’s also still at an age where we think he can get even better and at an age where he fits right in with what we’re trying to do, age-wise and talent-wise with our roster.”

The fact that Jackson’s played on so many teams? That didn’t bother the Cubs.

Hoyer said Jackson probably wasn’t ready when he debuted at age 20 with the Dodgers, and he attributed the more recent moves to the inability to sign him to an extension.

Now, maybe, Jackson can settle in. The son of a retired Army sergeant, he’s no stranger to big moves and along with this deal, he’s about to make another one. Jackson is getting married this weekend.

“You look at the team on paper, there’s a lot of potential there,” Jackson said. “I’ve been on a lot of teams that you look on paper, nobody expected you to do anything. You end up going to the World Series or making the playoffs. It’s definitely one of those teams where it’s a few pieces away from being where you want to be. I feel like with the additions that we have and the team that we have right now that we can go out and win ballgames and have fun and definitely have the city of Chicago behind us.”

In Chicago, he’ll be reunited with Matt Garza, his teammate in Tampa Bay. Those two and Jeff Samardzija figure to lead a rotation, with Travis Wood and newcomers Scott Baker and Scott Feldman. The Cubs are also working on a deal with pitcher Carlos Villanueva that’s pending a physical.

They also tried to land Anibal Sanchez, but he wound up staying in Detroit with a deal that guarantees $80 million over five years and could be worth $91 million if the Tigers decide to keep him for a sixth year. The same day Cubs president of baseball operations Theo Epstein and chairman Tom Ricketts were wooing him in Florida, Hoyer and manager Dale Sveum met with Jackson in Newport Beach, California.

The Cubs probably would not have signed both pitchers.

“But all along, we sort of operate on parallel tracks,” Hoyer said. “Both guys fit what we’re looking for as far as them being (in their late 20s) and being part of our core. It was interesting how (we had) sort of two camps. It just sort of ended up that way, schedule-wise. It wasn’t intentional.”