They were freed on Saturday after ransom talks between the Singapore-based owner of the MT Gemini and the pirates made a breakthrough.

They are expected to arrive in Kenya on Monday on the South Korean navy vessel that operates in Somali waters as part of a multinational anti-piracy campaign. The four will go through a quick medical check up and take a direct flight from Nairobi to Incheon on Tuesday, if possible, officials said. 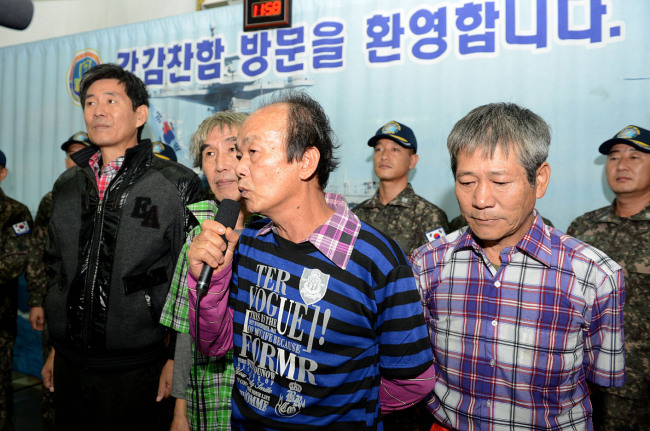 One of four Korean sailors of MT Gemini, freed by Somali pirates Saturday, speaks at a brief welcoming session held on a South Korean navy vessel that operates in Somali waters. (Yonhap News)
The four are in relatively good health and likely to return home Wednesday or Thursday, they added.

The four were kidnapped by Somali pirates some 320 kilometers southeast of Mombasa, Kenya on April 30, 2011, along with 21 non-Korean crew members aboard the MT Gemini. Seven months later, the pirates freed the vessels and the crews, except for the four Koreans, demanding the release of their colleagues serving prison terms in South Korea.

Some reports and sources say the taking of MT Gemini and the pirates refusal to free Korean nationals in captivity was a retaliatory action against the South Korean government. Five Somali pirates were arrested during a South Korean commando raid on the South Korean vessel MV Samho Jewelry that had been captured by the pirates on Jan. 15, 2011 in the Gulf of Aden.

The release of the sailors ends a series of incidents of Somali piracy targeting Koreans. Since 2006, about nine cases of South Korean registered vessels and Koreans aboard foreign ships captured by Somali pirates have been reported. No Korean has died during negotiations or rescue operations so far. Seok Hae-kyun of MV Samho Jewelry, however, was seriously injured during the rescue operation but survived with emergency medical help.

To protect crew members from possible attack by pirates in the future, the government plans to obligate South Korean ships to include a “citadel,” a safe room inside a ship, and also to have security guards on board.