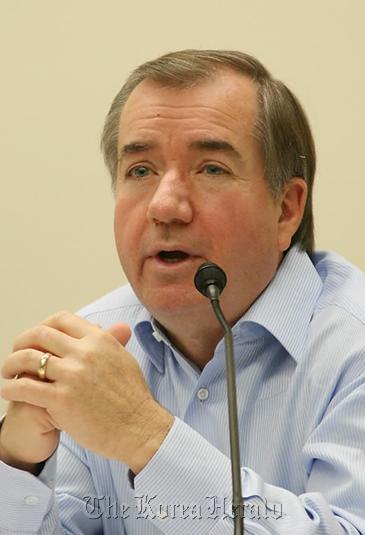 The nomination should be endorsed at the party’s plenary session slated for Wednesday. As the nomination is almost certain in the Republican-controlled House, Royce is to officially take over from Rep. Ileana Ros-Lehtinen on Jan. 3.

“If selected as chairman, I will work against the administration’s most harmful foreign policies, and exercise strong oversight over the State Department and other agencies,“ Royce said while announcing his bid for the chairmanship.

As a lawmaker with a foreign policy specialty, Royce has taken keen interest in North Korea issues such as human rights, nuclear proliferation and the forcible repatriation of refugees from the impoverished state.

His stance on Pyongyang’s dictatorial regime has been tough. Last year, he tabled a legal amendment to the country’s Agricultural Appropriations bill to prevent food aid going to the North.

He argued then that the aid would only prop up the autocratic regime ― which he called a “brutal and dangerous dictatorship” ― stressing that sending aid is the same as providing funding for the reclusive state’s nuclear program as the regime diverts resources.

In his recent posting on his blog, Royce also expressed concern about South Korea’s presidential candidates taking a softer stance on North Korea, saying that Seoul’s policy toward its northern neighbor could take an “unfortunate U-turn.”

“‘One candidate’ seeks a return to the few-questions-asked economic assistance of liberal presidents of the past. This will mark a return to South Korea’s failed ‘Sunshine Policy’ that started in the late 1990s,” he said in the posting.

“This (Sunshine Policy) didn’t bring any sunlight to North Korea, but it did deliver billions (of dollars) to the dangerous and brutal regime over the decade. The South wanted to keep talking, while the North was glad to pocket the cash and build bombs.”