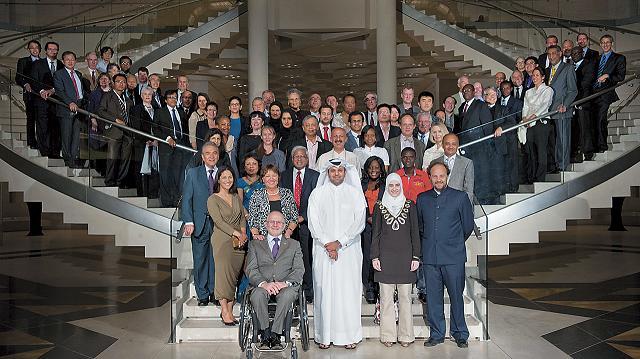 Participants pose at the World Innovation Summit for Education 2012 in Doha, Qatar on Nov. 15. (WISE)
DOHA, Qatar ― For many, the meaning of education is simply going to school and earning a degree. But for Suad Shariff Mohammed, from the Kakuma refugee camp, education is a hope and life.

Suad grew up and became a teacher at the refugee camp in northern Kenya, which is currently home to more than 100,000 people fleeing from war in Sudan, Congo and Somalia as well as a handful of other African nations.

“I’ve been living in Kakuma more than 10 years. I studied there, went to college on a scholarship,” she said at the World Innovation Summit for Education in Doha, Qatar.

“Without education, my life would have been miserable, but my education has really helped the community and my family,” said the 23-year-old, who now oversees over 1,400 students and 25 teachers in her school at the Kakuma camp.

Suad is among tens of thousands who are being funded by a global initiative called Educate a Child.

Sheika Moza bint Nasser, wife of the emir of Qatar, officially launched the initiative during the three-day summit in Doha last week.

Partnering with some global development organizations including UNESCO and the U.N. High Commissioner for Refugees, the Educate a Child initiative seeks to educate some 61 million children worldwide who have no access to primary education.

Sheika Moza said at the conference still “millions of children are being robbed of their fundamental right to quality education.”

Antonio Guterres, High Commissioner of UNHCR, noted that the majority of refugee children do not receive basic education, and the absence of basic education proves to be a lifelong handicap for them.

“But when I speak with children in the camps, I can see they are determined to get a better life and education is a basic tool to do so,” he said.

Educate a Child has already pledged to fund over $152 million for 25 projects in 17 countries, benefiting 500,000 children who are deprived of the fundamental right to education. And it is seeking to further global partnerships to reach out to more children in conflict zones, according to Sheika Moza.

“Money should not be a barrier to getting every child to school. Child plus teacher equals infinite hope,” he added.

More than 1,200 education leaders from 100 countries gathered in Doha last week for the World Innovation Summit for Education, organized by the Qatar Foundation under the lead of its chairperson Sheikha Mozah.

Under the theme of “Collaborating for Change,” the three-day summit explored “how collaboration in many forms can inspire in education,” through interactive discussions with speakers, experts and members from the WISE community.