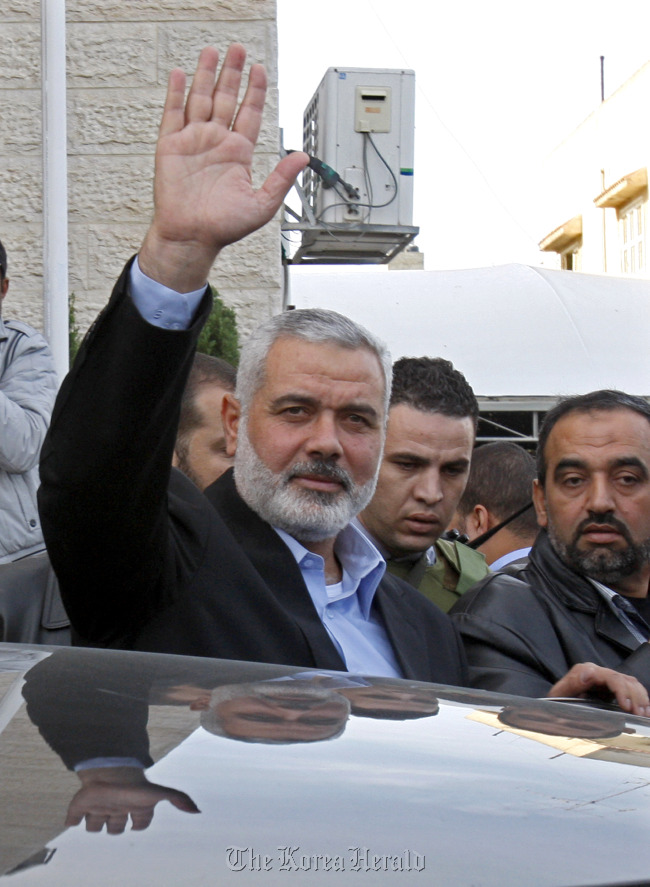 Gaza’s Hamas Prime Minister Ismail Haniyeh (AP-Yonhap News)
Gaza’s ruling Islamist movement Hamas laid out its conditions for a cease-fire with Israel over the weekend, but Monday failed to see an end to the deadliest hostilities since 2009 as violence continued into its sixth day.

The militant organization, defined by the U.S. and EU as a terrorist group, has demanded an end to the blockade of Gaza, as well as a commitment by Israel against any future attacks against it, in return for ceasing rocket attacks on the Jewish state.

Intermittent violence between the two sides had been a feature of recent weeks, but the assassination of Hamas’ military chief by the Israel Defense Forces on Wednesday marked the start of the biggest Israeli offensive on the strip since the Gaza War. So far, the violence has reportedly claimed the lives of close to 80 people in Gaza, many of them civilians, and three Israeli civilians.

Despite its expressed openness to peace, the Hamas leadership will be fully aware that its conditions are unlikely to be met. Israel has maintained the blockade since Hamas was voted into power in 2006, arguing it is necessary to prevent the smuggling of weapons to militants.

While any reasonable assessment of Arab-Israel violence must apportion some blame to both sides, the extremism that runs to the very fiber of Hamas makes peace all but impossible. Its founding charter not only denies Israel’s right to existence, but it is littered with Holocaust denial and wild conspiracy theories about Jews’ sinister influence over historical events and world affairs.

Despite extensive work in health care, education and social welfare, the organization has also shown itself perfectly willing to visit its fanaticism upon its own people. Gaza’s Interior Minister Fathi Hamad has previously boasted about Hamas’ use of human shields, claiming that Palestinians “desire death” as the “Zionists” do life. Moreover, the group’s religious fundamentalism has manifested itself in decrees against women riding motorcycles and women dancing at the opening of a folk museum.

It would be a mistake to allow Hamas’ extremism to prevent criticism of Israeli policy or unjustified violence where appropriate. But there remains a fundamental difference between the values of Israel, one the most advanced societies in the world just six decades since gaining independence, and the dangerous, backward-looking vision embraced by Hamas.