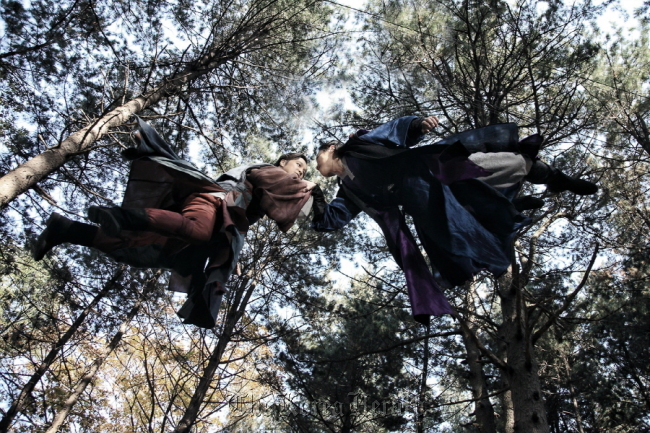 A scene from “Jeon Woo Chi.” (Chorokbaem Media)
The Korean historical romance is a cornerstone of national television.

Rather than grow rickety with age, the genre is still very much alive and kicking, thanks in part to the iconic “Jewel in the Palace,” a huge local and global success.

While period pieces like “Jewel in the Palace” are a linchpin of today’s historical drama market, they are not the only series keeping viewers interested in televised history.

As the Korean Wave fostered the popularity of the traditional genre abroad, a fusion take on the period piece took root in the 21st century.

Most notably, “The Legend” (2007), a popular fact-based fantasy featuring hallyu star Bae Yong-joon, helped pave the way for the new twist on a classic formula.

Some other standout series include “Iljimae” (2008) with Lee Jun-ki as the masked hero and the action-packed “The Slave Hunters” (2010), which cleaved towards tradition by staying grounded in reality but broke the rules with its over-the-top martial arts stunts and sheer, gritty, near-nude audacity.

Both “Iljimae” and “The Slave Hunters” were produced and co-produced, respectively, by Chorokbaem Media.

This fall, Chorokbaem is returning with yet another fusion fantasy, “Jeon Woo Chi.”

Given the company’s track record, things look promising for the upcoming drama, which is slated to start Wednesday.

Then again, because of audiences’ lukewarm response to recent fusion period pieces, “Jeon Woo Chi” might not be such a surefire success.

The historical fantasy, “The Great Seer,” currently airing on Mondays and Tuesdays, is failing to nab high ratings.

Other recent fusion period pieces like “The Great Doctor” and “Tale of Arang” also struggled to get the lion’s share of viewers for their respective timeslots.

Meanwhile, “A Jewel in the Palace” director Lee Byung-hun’s new classic historical romance, “The King’s Doctor” is reeling in top viewer ratings for its Monday and Tuesday night timeslot.

Director Lee Byung-hun is living proof of the longevity of the classic historical romance and of his own mastery of the genre.

Based on what Kimjonghak Production’s Park revealed about director Lee’s latest project, infusing the set, the props and the story with as much reality and authenticity as possible seems to play a big role in bringing Lee’s period pieces to life.

According to Park, even the acupuncture scenes were handled by real doctors.

Reality works, and not just for director Lee. Other traditional period pieces like “Prince of the Legend” (2006) and “The Great Queen Seondeok” (2009) have seen resounding success as well.

Yes, history definitely has its charms. After all, there is something heartening about knowing that the underdog hero or heroine of this story really existed, really overcame his or her odds and realized his or her dreams.

But does that mean there is no room for fantasy?

When audiences latched on to the tale of a fictional Joseon king in “Moon Embracing the Sun” (2012), it became quite clear that non-historical period pieces work as well.

The protagonist did not need to be a real-life textbook figure in order for viewers to buy into the story.

In the realm of fantasy, however, “Moon Embracing the Sun” was incredibly conservative. The premise was fictional but the setting and the characters stayed grounded in reality. There was very little magic, save for that exercised by the female shamans, and the high-flying martial arts stunts were kept to a minimum.

“Jeon Woo Chi,” on the other hand, is a full-blown fusion Joseon romance featuring magic-wielding superheroes and villains and the therefore necessary special effects.

Aside from the wire action, computer graphics are also part-and-parcel of the upcoming drama.

“If you aren’t bold about it, a CG scene can come off uber-cheesy,” said “Jeon Woo Chi” actor Cha Tae-hyun at the drama’s press conference last Wednesday. “So when I am throwing ‘jangpung’ (gusts of wind from my hands) I have to seriously believe that is what I am doing.”

“Jeon Woo Chi” co-star Lee Hee-joon revealed that he was initially embarrassed when he first started filming scenes where computer graphics would be added in later.

Director Kang Il-soo said, “How you handle the CG is crucial to fantasy dramas.”

Of his first time filming a fusion historical romance, Kang added, “It is a new endeavor on my part so I encountered many difficulties at first.”

“Fantasy period pieces are not an easy genre, but I think they invite the continual rise to the challenge and experimentation,” Kang said.