In 2010, a spin-off titled “ATHENA: Goddess of War” was unleashed. Despite the star-studded line-up featuring Jung Woo-sung and Cha Seung-won, the series failed to match its predecessor’s success.

Now the latest installment, “IRIS II,” is slated to air in February. Will it deliver?

Based on what “IRIS II” lead Jang Hyuk said at the drama’s press showcase Tuesday, the action, at least, is unlikely to disappoint. 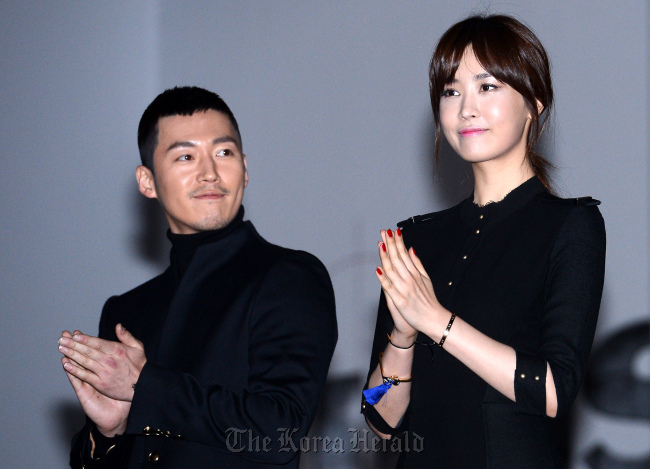 “IRIS II” co-stars Jang Hyuk (left) and Lee Da-hey, working for the third time together in the upcoming sequel, attend the drama’s press showcase in Seoul on Tuesday. (Ahn Hoon/The Korea Herald)
Actor Jang, who proved his flair for the genre in the hit drama “The Slave Hunters,” said, “I plan on doing action sequences that are pared down, real and gritty rather than glitzy and showy.”

Jang will be playing NSS operative Jung Yoo-geon in the upcoming series, which kicks off three years after the mysterious demise of the first installment’s hero, NSS agent Kim Hyun-jun (Lee Byung-hun).

Agent Jung (Jang Hyuk) and team work to uncover the identity of the secret organization IRIS, while also doing double duty as bodyguards at a summit for North and South Korea. Jung has also been tasked with transporting a rogue NSS director to safety, is ambushed by IRIS and goes missing.

At the press event, co-star Lee said she was glad to be working with Jang again. This is their third time working together.

“After working with Lee Da-hey on SBS’ ‘Robber,’ I recommended her as the lead for ‘The Slave Hunters,’” Jang, 35, elaborated.

Jang said he did not push for actress Lee this time around, that the third time was “pure concidence” and added that he believes the two will have good, “natural,” on-screen chemistry.

It looks like Jang and Lee will have plenty of opportunities to show off their on-screen compatibility.

“Full House” director-and-melodrama veteran Pyo Min-soo is teaming up with “ATHENA” co-director Kim Tae-hoon on “IRIS II” and promises to bring his knack for romance into the mix.

“I plan on really amping up the melodrama throughout the series so I think there will be a few memorable moments,” co-director Pyo said when asked if there are any scenes that might surpass the much-talked-about “candy” kiss from the first installment.

As for the action, plans are to upstage the “IRIS” Gwanghwamun scene and “Athena” Incheon Bridge spectacle.

“We are going for a sea of fire this time around,” said Chung Tae-won, head of the drama’s production company, Taewon Entertainment.