Each process required to build a vessel ― from steel sheet cutting to ship block manufacturing ― is in full swing.

“We are lucky to have backlogs of orders that stretch to 2013,” SPP Shipbuilding CEO Kwak Han-jeong said in an interview with The Korea Herald. 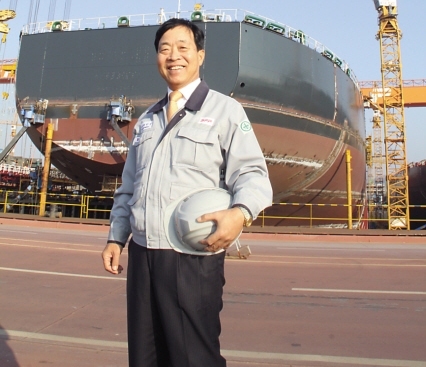 Industry watchers said the nation’s shipbuilders, especially mid-sized ones, will face the coldest winter in their history this year, hit hard by the prolonged economic crisis in the eurozone from where the biggest demand for shipbuilding comes. Several small and mid-sized shipyards have been put up for sale this year.

“Business conditions this year for shipbuilders, big or small, have never been worse due to falling shipbuilding orders for the past few years. Even worse, ship owners are taking advantage of the buyers’ market, offering shipbuilders the price below the cost of manufacturing,” said Kwak, who has 30 years of experience in the shipbuilding industry.

Global ship orders dropped 53 percent in the first nine months of this year to 31.1 million deadweight tons, according to Clarkson.

“Every shipbuilder is busy looking for ways to stay afloat, hoping that the business cycle will show a pick-up late next year,” he added.

The relatively sound position of SPP Shipbuilding comes from its strategy to focus on core competency. The company, which was founded as a ship block manufacturer in 2002, decided to focus on the mid-range market when it entered the shipbuilding business in 2005.

“We targeted middle-range chemical and oil carriers from the start. As a latecomer, it was difficult to find land to build a large shipyard, and the founding members thought it was a losing game to compete with larger shipbuilders,” Kwak said.

As of now, SPP runs three mid-sized shipyards, in Tongyeong, Sacheon and Goseong in South Gyeongsang Province, and has a research and development center in Busan, which is 40 minutes away by car from the company’s headquarters at the Sacheon shipyard.

“Focusing on strengths has raised efficiency in many aspects from manufacturing costs to the skills of workers. For now, we manufacture 45 middle-range vessels per year and continue to invest in R&D to upgrade product quality in the target market,” he said.

Under the strategy, SPP has built its reputation as a world-class middle-range tanker manufacturer.

“We are investing in green technology for middle-range tankers. We will continue to find business opportunities in our target market,” Kwak said.

The engineer-turned-CEO stayed positive about the competiveness of the nation’s shipbuilding industry.

“Not many countries in the world supply quality materials like steel sheets, skilled workers and efficient shipyards at the same time. Despite the business downturn and rising competition from China, I believe that the nation’s shipbuilding industry will be able to sail through difficulties as Korea has a strong infrastructure for the shipbuilding business,” he said.

“Mid-sized shipbuilders, however, have to focus on their core competency rather than diversification, to cope with rising competition from China and customer demands,” said Kwak.