[ The Korea Herald – Send E-mail ]
Elite education not a surefire path to success
Lawyer-turned-educator emphasizes importance of creative learning, interactive English study
By Korea Herald
Published : Nov 12, 2012 - 20:41
Updated : Nov 12, 2012 - 20:41
To parents who want their children to excel in school and have successful careers, she might be the perfect role model.

Yoon Seon-joo graduated from the prestigious Seoul National University and worked as a producer at SBS, one of the country’s three major broadcasters. She then studied at Harvard Law School and Harvard Kennedy School, and worked as a lawyer with an international law firm.

However, she doesn’t believe Korea’s elite education was a surefire path to success.

“I don’t think I’m a perfect role model. I’m actually more of a victim of the old education system,” the 35-year-old said in a recent interview with The Korea Herald.

It was clear when she had a hard time studying at Harvard Law School.

“I’m a test-type person, and always did well in tests, cramming the night for the test next day. But it was no longer possible at Harvard,” she recalled.

“There was so much to learn, and the tests required creative thinking and problem-solving skills. There were times when I felt ashamed when I realized that I lacked creativity in comparison with other foreign students there.” 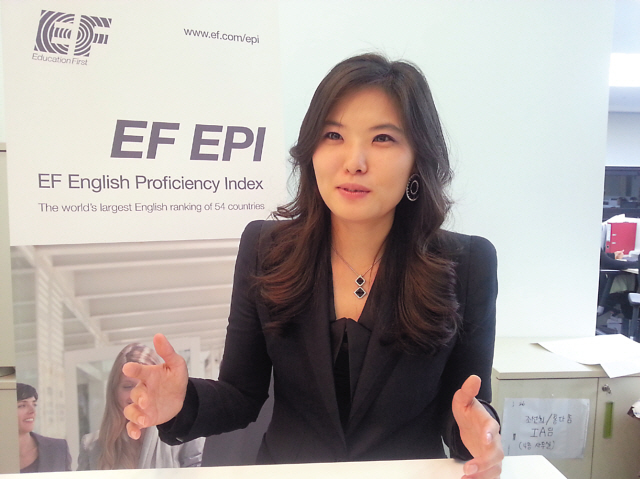 Founded in Sweden in 1965, EF Education First, which specializes in English language training, is one of the world’s largest private education companies.

It currently has offices and schools in more than 50 countries, and Yoon has been in charge of the office in Seoul since July.

Although she was considering working in a more creative field, she did not think of becoming an educator until earlier this year.

“While I was working in Hong Kong, a friend of mine who works in EF in London called me and said, ‘You should come to Korea immediately, the heads of EF want to see you in Korea,’ I couldn’t answer it, because I knew little of EF then,” she recalled.

But after some research she found that EF has its own unique language learning system which allows students learn in a varied global learning environment.

“I once lived in Wisconsin in the United States as my father (former Finance Minister Yoon Jeung-hyun) was studying at the University of Wisconsin-Madison. And I went to a local public school which many children of the graduate students of the university attended. And it was very special for me as there were students of more than 50 different nationalities. I could experience the global society,” she said.

The EF Education First likewise offers students a unique experience in a global environment, running classrooms with a good mix of nationalities, she said.

Yoon also said she took the job because she believed some of the things holding back Korean students from competing globally is language and cultural barriers that prevents them from fully engaging with other foreign students.

In a recent study of 1.7 million people over 50 different countries conducted by EF Education First, Korea ranked 21st with “moderate proficiency” in the global English Proficiency Index, behind Argentina and ahead of Japan.

“There are many reasons, but I think outdated teaching methods and the curriculum that emphasizes grammatical accuracy over speaking fluency are to blame,” Yoon said.

Only promoting more interactive teaching and active learning in classrooms can improve English proficiency, she added.

Yoon noted that the EF Education First, for example, offer special interest classes called SPIN, where students can pick study areas, ranging from arts to business, of interest to them.

“We should develop more programs that allow students to learn English and at the same time build their knowledge in topics that appeal to them.”

The EF Education First Korea is hosting its inaugural speech contest on Saturday and Sunday, for contestants who have gone through preliminary rounds for a chance to win scholarships for overseas language courses (www.efspeechcontest.com).

Yoon noted that the speech contest aims not only to train students in speaking English but also to develop public speaking skills.

“We’re not looking at whether their pronunciation and intonation are perfect, but how they convey their thoughts in English, because most communication in English today is between non-native speakers, who usually accept non-standard grammar and pronunciation as long as communication remains clear,” Yoon said.

It’s only been four months since she joined the education firm, but Yoon noted she is looking further into expanding English language training programs here.

English proficiency is no longer a marker of the elite but becoming a basic skill needed for young Korean students and workers, she said.

But her long-term goal, she added, is to open a EF Korean school here.

“The EF Education First already runs French, Spanish, German, Italian, Chinese and Japanese classes, but not a Korean class at the moment. I know it will take considerable time but I’m hoping to open a Korean school as I believe the global demand for learning Korean will keep growing,” she added.