Major League Baseball announced early Sunday, Korean time, that the Dodgers submitted a bid of about $25.7 million for the service of the 25-year-old pitcher.

Ryu’s South Korean club, the Hanwha Eagles, accepted the bid on Saturday, when only the amount of the bid, not the club that submitted it, had been known.

The Dodgers had been said to be among the interested suitors for Ryu, along with the Chicago Cubs and the Texas Rangers.

Under the agreement between MLB and the Korea Baseball Organization here, bids were submitted in a silent auction as part of the “posting” process for Ryu. 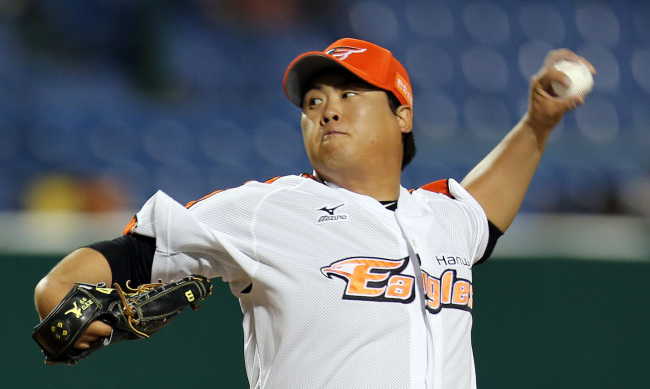 Ryu Hyun-jin is seeking to become the fourth Korean to play for the Los Angeles Dodgers. (Yonhap News)
After the Eagles agreed to post Ryu and informed MLB of his availability, big league clubs had a four-day window to submit their bids.

Following the Eagles’ acceptance of the Dodgers’ offer, the L.A. club now has the exclusive right to negotiate a contract with Ryu over 30 days. The pitcher is represented by uber-agent Scott Boras.

If the contract is signed, the Eagles will take the bid money as a transfer fee of sorts. If the Dodgers and Ryu can’t come to an agreement, Ryu would stay with the Eagles and will not be eligible for posting until November next year.

The Dodgers’ bid was the highest ever for a South Korean player attempting to reach the majors, and the fourth highest for an Asian player behind three Japanese pitchers: Yu Darvish, Daisuke Matsuzaka and Kei Igawa.

“We are thrilled to have this exciting opportunity,” Dodgers general manager Ned Colletti was quoted as saying on MLB.com.

“We have watched Ryu pitch for a long time, and he is another option to consider as we look to improve our team in 2013 and beyond. We’d like to thank the Hanwha Eagles and we look forward to meeting Ryu and beginning the negotiation process very soon.”

Ryu, 25, joined the KBO in 2006 as the second overall draft pick out of high school and became the first player to win both the MVP and the Rookie of the Year honors in the same KBO season.

He has since been one of the KBO’s most dominant starters.

He averaged almost 15 wins a season from 2006 to 2010 but was limited to nine wins this year on the league’s worst team, despite posting a 2.66 ERA. He has led the KBO in strikeouts in five different seasons.

The thick-bodied pitcher, listed at 187 centimeters and 98 kilograms, has averaged more than 181 innings per year and has pitched more than 200 innings in two different seasons.

He can reach up to 150 kilometers per hour with his fastball, and can also throw a changeup and slider as his out pitches.

Should they sign Ryu to a contract, the Dodgers would have to make room for this career starter in their rotation.

They may seek to trade one of the veterans.

Three South Koreans have played for the Dodgers. In 1994, right-hander Park Chan-ho joined the Dodgers to become the first Korean to play in the majors.

Park and Ryu were teammates on the Eagles in 2012. Pitcher Seo Jae-weong and first baseman Choi Hee-seop have also spent time with Los Angeles. (Yonhap News)