“I guess everyone knows what it is,” she said, pointing to a picture of a tomato.

“Yes, it’s a tomato, but in the Philippines we call it ‘kamatis,’” the 27-year-old Filipina said, the students repeating the word.

“How about this? We call it ‘talong’ and in English it’s an eggplant.”

This time, some students struggle to pronounce the Filipino word.

During the 40-minute class, most students seemed to enjoy learning a new language.

“I think the students are having fun because we can communicate with them in English and at the same time we learn Philippine words,” Alfaro told The Korea Herald in a classroom of Masongjungang Elementary School in Gimpo, Gyeonggi Province.

She is one of 30 Filipino teachers who have been working at 20 different elementary and middle schools in Korea since last month under an international teacher exchange program set up by the Education Ministry.

“Up to now, I’ve been teaching English, but today I start teaching Philippines’ culture and language. I’m planning to introduce more culture, dances and different songs, of course our foods as well,” Alfaro said.

“I’m sure that will be very exciting for students, and help them improve international understanding,” she added.

Run by the Asia-Pacific Centre of Education for International Understanding, or APCEIU, under the auspices of UNESCO, the program was first implemented in April as a bilateral teacher exchange between Korea and Mongolia. The program was expanded this summer to include the Philippines. 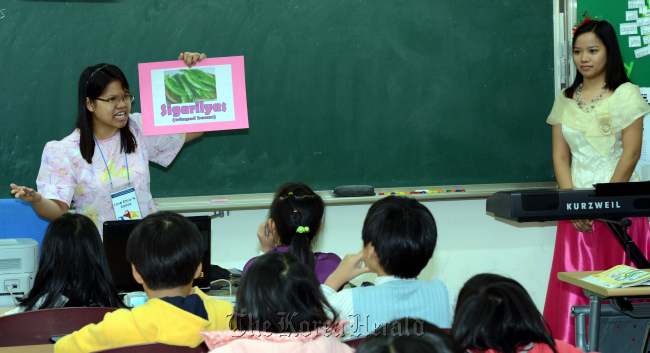 Students attend a class with two teachers from the Philippines at the Masongjungang Elementary School in Gimpo, Gyeonggi Province. (Chung Hee-cho/The Korea Herald)
So far 40 teachers from Mongolia and 30 from the Philippines have been assigned to work as assistant teachers at local schools for about three to six months, said Lee Yang-sook, the head of the International Teacher Exchange Team of APCEIU.

“While working with each other, Korean, Filipino and Mongolian teachers will learn each other’s educational curriculums and system to improve their understanding of the different countries,” Lee said.

Students, especially with multiethnic backgrounds, can also benefit from the program, said Yoon Seok-ryong, the principal of Masongjungang Elementary School, where about 10 percent of students are from multicultural families.

“We have four students born to Filipino mothers. They are usually reluctant to speak of their mother country,” Yoon said.

“But they have been different now since two Filipino teachers started to teach at our school. I think they love spending time with their new teachers, and they begin to take pride in their mothers' country,” he added.

The principal also noted that other students seemed to be more able to recognize similarities and differences with their foreign teachers.

“The teachers exchange programs allow students to explore different cultures and offer opportunities for them to learn that even when people have different customs and traditions, they often share some common traits, too,” he said.

Lee noted that such an international education program will be crucial as the country is becoming a more multi-cultural society.

The increase in ethnic and cultural diversity in Korean society is already reflected in many early childhood classrooms.

“We run a special class once a week, where students can learn various cultures and different languages, such as the Philippines’ Tagalog language and Mongolian folk wrestling, to improving international understanding of students,” he said.

While there are increased opportunities to appreciate cultural diversity, it is urgent to effectively meet the educational needs of students from multicultural families, the principal added.

“The number of multiethnic students is growing quickly, but we still lack teachers and resources to teach them,” Yoon admitted.

Lee of APCEIU also pointed out that a growing number of students from multicultural families are dropping out school because they cannot adjust to school life.

In Gyeonggi Province, where the majority of multicultural students reside, there are still about 6,600 school age children, or 7 percent of all students from multicultural families, not in school.

“The diverse composition of early childhood classrooms brings many challenges as well as many opportunities to educators,” Yoon said.

“I think the foremost important thing is we recognize that children from multicultural families are part of our society and they’ll play an import role in our country,” he added.