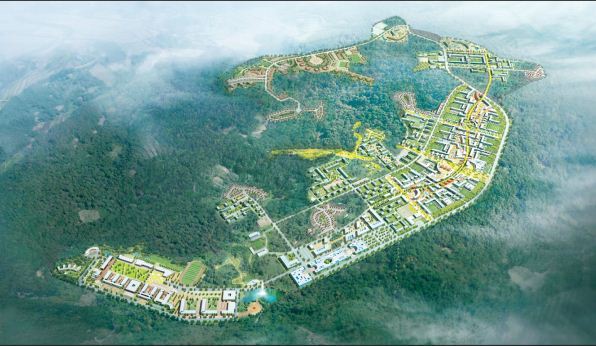 An aerial view of Jeju Global Education City in Seogwipo on Jeju Island. ( JDC)
SEOGWIPO, Jeju Island ― Jeju Island has long been the gem of Korean tourism with its natural wonders, mild weather and convenient access from neighboring countries.

It was the center of Korea’s plans to turn the nation’s cities into Northeast Asian hubs for various businesses in the early 2000s when the volcanic southern island was designated a free international city with no-visa entry, tax-free shopping and a range of advantages for tourists and businesses.

Jeju is now sseeking to rival Hong Kong and Singapore as Asia’s center of international education.

Central and local governments are investing heavily in creating a global education town in the southern part of the island to attract children of a growing number of expatriates and Korean parents seeking alternatives to expensive overseas studies.

Established in 1903, Branksome Hall is one of Canada’s most renowned private schools for kindergarteners to Grade 12 students. Branksome Hall Asia on Jeju Island is its first and, so far only, overseas sister campus.

It is located in Jeju Global Education City established in 2008 to create a world-class educational environment for both Korean and foreign students though international partnerships and a high-end learning environment with state-of-the-arts facilities.

With an investment of some 1.78 trillion won ($1.62 billion), the Jeju Free International City Development Center launched in 2002 aims to open at least 12 international primary and secondary schools in the about 3.79-million-square-meter area.

The new city will also accommodate an English education center, residences, hospitals and other welfare facilities to attract foreign students across Asia, according to JDC Chairman Byon Jong-il.

“We’re getting close to our goal. We need to establish one more international school’s campus here, and we’re now in talks with several renowned American institutions,” Byon told The Korea Herald.

The authorities expect that when the project is completed in 2015, the student bodies will increase to nearly 9,000 and the city’s population to rise to some 23,000.

“By 2015, we aim to draw more than 9,000 foreign and Korean students who want to enter an English-immersion environment,” Byon said.

“We’re fully committed to making it an educational hub in the Asia-Pacific region,”

The English-immersion city plan was first launched in 2007 in response to soaring costs for overseas education.

“The purpose of the JGEC project is to meet the demand of parents who would otherwise send their children overseas,” said Lee Sung-ho, general director for the Edu-city Department of JDC.

The international schools on Jeju are designed to provide advanced educational services to those who are not content with local educational services. The city would also serve as a place to train English teachers and public servants and develop English education programs and policies.

“There are also no limits on the admission rate or qualifications for local students to attend the international schools here, so the schools here can help eradicate admission scams, such as unqualified Korean nationals entering foreign schools,” Lee added.

Korea is believed to have some of the strongest zeal for English education in the world but is ranked 21st among 54 countries in English proficiency, according to a recent survey by global education company EF Englishtown.

While the number of elementary and secondary students who study overseas rose more than two times from 7,944 in 2001 to 16,515 in 2011, the deficit arising from studying and English learning overseas increased more than four times from $1.06 billion to $4.41 billion during the past decade, according to the Ministry of Education, Science and Technology.

The ministry says it takes some 70 million won to 100 million won annually, including tuition fees and living costs, to send a child abroad to study.

But the JDC claims that when the English-immersion education town is completed on Jeju Island with a combined enrollment of some 9,000 students, it could save up to $600 million of the amount spent on sending young students overseas annually.

“To become a free international city, it is vital to create a living environment favorable to foreigners, including education and medical services to facilitate business relocations,” Lee said.

Observers say, however, many difficulties still lie ahead of the ambitious project of Jeju Special Self-Governing Province.

The National Assembly’s inspection of the JDC earlier this month exposed a series of problems, including increasing costs for building the “global education city,” the high cost of tuition expected for students here and the lack of foreign students.

“At the moment, foreign students at those three international schools make up less than 10 percent of the total enrolled students,” said Lee.

The official also admitted that the JDC has secured only 40 percent, or some 800 billion won, of its budget. And much of the investment is coming from the central and local government, but it still struggles to attract direct foreign investment.

“The biggest challenge is that the schooling service is a non-profit business, so it’s quite difficult to attract foreign investment,” Lee said.

But the official added that he is confident that the global education city project will be a great success.

“We’re still in the early stages, but now we’re focusing on marketing. We believe that by the time JGEC’s international school campuses produce their first graduates in 2014, more parents will be encouraged by the quality and excellence of the education environment here,” he added.

Students and educators hope for the success of the international education project.

“I studied for three years at a boarding school near London before coming here, but it wasn’t a great experience because I missed home a lot,” said Yoo Soo-yun, 11, a student at Branksome Hall Asia.

“But here in Branksome Hall I feel much more comfortable because I can call and meet my parents quite easily, and here I can have Korean food whenever I want,” she added.

The school’s officials said the institution would provide courses and an education system identical to those in the school’s headquarters in Toronto.

“Branksome Hall Asia will honor the unique culture and environment of Jeju. Also, students here will enjoy the same benefits and honors as their counterparts in Toronto,” Principal Glen Radojkovich told reporters on Monday.