Those were the first words out of entertainer Robert Holley’s mouth during a recent interview in a Hongdae coffee shop. And being that busy in a career that has spanned nearly two decades and is still going strong is no small feat.

“I had a friend and he said, ‘This is probably going to last two or three years and then it’s going to stop,’” Holley said. “And here I’m still doing it. Seventeen years later.”

Being this busy 17 years into his career is something he never expected. Holley is rarely home in Gwangju because of filming, talks and special appearances. He recently had a supporting role on popular KBS drama “Oohlala Couple.” He currently has two regular TV shows he appears on ― jTBC’s “Shinehansoo” and MBC’s “Happiness Marriage Committee.” And he plays a professor in upcoming comedy film “Kang Chul Dae-oh.”

Outside of that he also appears on MBC’s “The Quiz that Changes the World;” is regularly on the Home Shopping Network; does festivals and talks all over the country; is the public ambassador for the city of Busan, EMS and immigration’s speedy entry and exit system; and still manages to squeeze in conducting weddings for friends every now and then.

Not to mention, he has the Gwangju Foreign School that he and his wife opened 13 years ago. He said for now, his wife mostly runs the school. 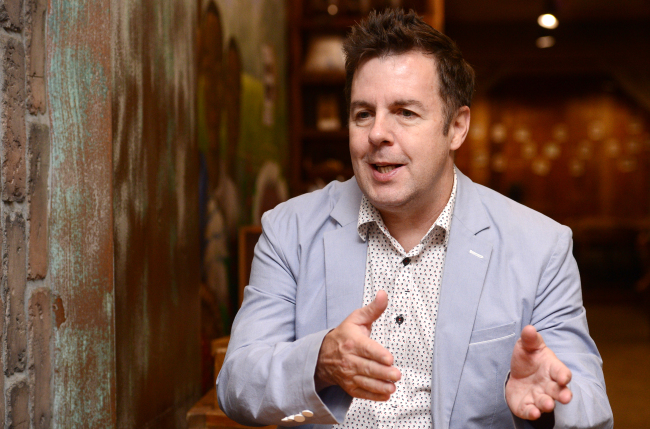 Entertainer Robert Holley sits during an interview at a coffee shop in Hongdae on Oct. 11. (Ahn Hoon/The Korea Herald)
“You hate it when you’re really busy, but actually, I think deep down you’re a lot happier knowing that you’re doing a lot of things,” he said. “I actually hate doing those shows until midnight, because it’s tiring. But I’m glad I have those shows. It’s nice to say that I’m busier now than ever.”

He says in his career, he is currently on a “good wave.” One of the hardest parts about being in broadcasting is that the work comes and goes, according to Holley.

“You get really busy, and then what you’re doing will disappear someday and you’re out on the street again looking for other programs,” he added. “I’m sure in six or seven months I won’t be nearly as busy.”

And while Holley has built up a solid career, he said maintaining his family life is one struggle that never goes away. He lives apart from his wife, spending most of his time out of Gwangju. His three sons ― Robbie, Kevin and Bradley ― are now all studying at university abroad.

“Of course the kids loved to see Daddy on the weekend, but Daddy was gone a lot of the time. So that has been hard,” he said. And now that the kids are gone, he is hoping he’ll be able to spend more time with his wife, especially since the couple’s 25th wedding anniversary passed last week.

“We’ve made it work. It’s our silver wedding anniversary, it better work.”

Holley said that now the kids are gone, his wife is able to stay over whenever she makes trips to Seoul for school or medical reasons during the week. And they are adjusting to the change. His oldest son is studying business, while the younger two hope to follow in their dad’s footsteps and are majoring in acting.

“It’s hard because I’m away from my wife so much and I was worried about that,” he said. “It’s weird and I thought it would be more weird.”

Even though Holley is riding a good wave in his entertainment career, he understands that it won’t last forever.

“In the future you never know with TV because a lot of stars stop. And someday my time will stop, of course. I won’t be able to do things anymore,” he said. Which is why he wants to focus on his school and making it successful.

Currently, his wife does most of the work for the school, but Holley tries to go visit as much as possible. He said the last graduating class contained the first students who started out in kindergarten and went all the way through to 12th grade, including his youngest son Bradley.

What does the future hold for Robert Holley?

He wants to do more work with his school, which just completed an expansion of the campus. He said he has also contemplated opening a pot stew restaurant. Or, he might end up working for his sons, should they start their own successful entertainment careers.

“I’ll have to be my sons’ manager. That will be my future. Managing my sons’ careers.”