Korea is a paradise for cosmetics, according to Herve Bouvier, the head of Estee Lauder Companies Korea, and a trendsetter for international cosmetic companies.

“BB cream is an example. Started out in Korea, the products became a hot sale in the U.S. and Germany, and European and American global companies started to sell them,” the representative director and general manager of global cosmetics conglomerate Estee Lauder’s Korean affiliate a.k.a. ELCA Korea told The Korea Herald last week.

“It means that what is hot in Korea becomes hot outside of Korea. Korea is our benchmark. If a product sells well in Korea, we know it will work. Japanese and Chinese women now come here to find out what Korean women use. Many Korean things are becoming very popular in the world right now, and cosmetics is one of them.”

The U.S.-based cosmetics giant sells in 140 countries and has about 40 affiliates throughout the world. ELCA Korea ranks fifth among the affiliates, following market leaders the U.S. and U.K., and then two Asian countries ― China and Japan ― which are more or less on par with Korea.

Taking into account the duty-free division, which is operated directly by the Estee Lauder New York headquarters, Korea would be facto No. 4, said Bouvier.

“Today, Korea for Estee Lauder is bigger than Germany, France, Spain. Even if Korea is in a significant (economic) slowdown, we will not lose this,” said Bouvier.

Korean women are more open to new things compared to five years ago, he said, and are more proud to be themselves, rather than mimicking ideal Western women as in the past.

“Peer pressure (does) still exist, but an interesting new phenomenon is that Koreans always want to take the lead and try new things by themselves. This individualism in purchasing is a new trend that started here only about five years ago,” he said. 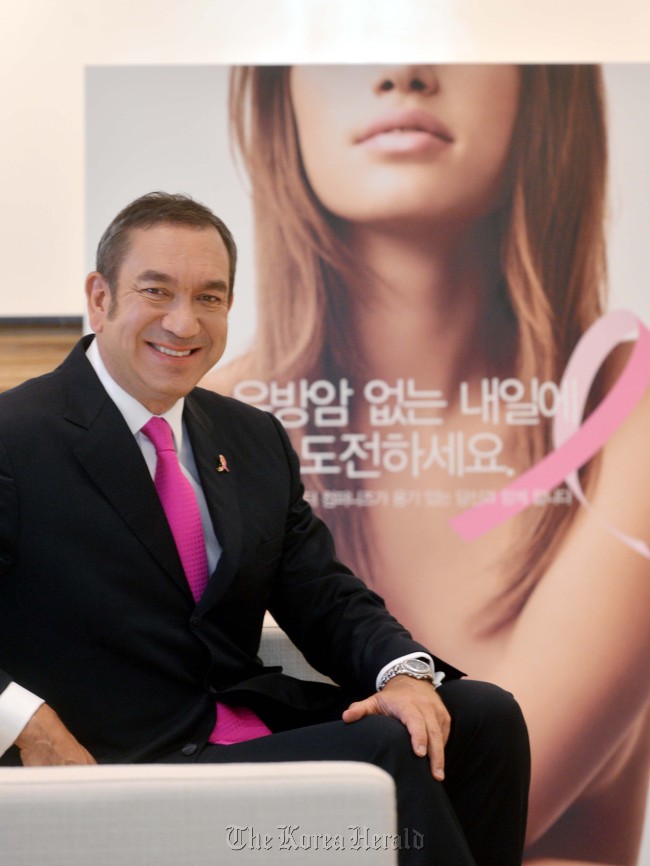 ELCA Korea’s Representative Director and General Manager Herve Bouvier poses at the company headquarters in Yeoksam-dong, southern Seoul. (Lee Sang-sub/ The Korea Herald)
The newfound adventure-seeking DNA is also detectable in Korean women’s attitudes about breast cancer, the most common cancer found in the group. ELCA Korea has been taking part in Korea Breast Cancer Society’s Pink Ribbon campaign for the past 12 years, and Bouvier said that he has seen a dramatic shift in Koreans’ mindsets.

“It used to be considered like some sad and serious secret, and people didn’t even want to say the name. But not anymore. When people see the pretty pink ribbon, they think celebration, and (the) victory of saving life. It is all about prevention. Today, Korea is one of the most dynamic countries in terms of fighting cancer,” he said.

Evelyn Lauder, daughter-in-law of the company founder Estee Lauder, was one of the founding members of the worldwide Pink Ribbon campaign. The cosmetics company has been participating in the campaign for two decades now.

The Estee Lauder company has raised about $35 million for 140 Breast Cancer Research Foundations throughout the world so far, and the Korean affiliate has promised to donate to 13 foundations this year. The value of donations increases every year, said Bouvier.

Most of the fund will be raised this month, when special campaigns celebrating the 20th anniversary of the Pink Ribbon campaign take place worldwide, including in Korea. Notably, all of the company’s brands including Estee Lauder, Mac, Bobby Brown and Clinique will choose certain products here to be “pink ribboned” and sold, and all the profits will be donated to the Korea Breast Cancer Society.

Witnessing the growing influence of the Korean cosmetics market, the Estee Lauder Companies’ brands that are not yet introduced in Korea in fact wish to be launched here, according to Bouvier, in the hope of making a global statement.

ELCA Korea is looking to launch more niche brands here such as Tom Ford Beauty, Smashbox, Osiao or Zegna Fragrance, but not more than one brand a year.

Regarding criticism that imported cosmetics are sold too expensive here, Bouvier listed three justifications for Estee Lauder ― that it spends a lot of time and money in conducting research and on innovation; the costs of importing; and that it provides the best service.

“I wouldn’t want to buy the product in the U.S., if you see the service here. Knowledgeable beauty advisers give you the best product and right samplings. We differentiated our products by high technology but also by high service,” he said.

Department stores will therefore remain the primary channel of distribution, although the company is making efforts to appeal to young consumers as well by opening online stores.

“We are not only speaking about Korea as a place to sell, but more a place to be inspired by. We are putting in more resources to capture Korean culture and spirit in order to leverage globally and make our brand stronger. We plan to do more surveys and analysis in Korea. It will probably change the way the world is working tomorrow,” he said.