If all three main presidential candidates share a common campaign theme, it’s their focus on greater economic equality and fairness. Social welfare and “economic democratization” have dominated the rhetoric of Ahn Cheol-soo, Moon Jae-in and Park Geun-hye alike, pushing the issue of economic growth, a major plank of the platform of then-candidate Lee Myung-bak, onto the backburner.

Yet, the recent news on the economic growth front has been far from inspiring. At the end of last month, Standard & Poor’s lowered the country’s growth outlook for this year to 2.5 percent, following similar downward revisions by the Korea Development Institute and International Monetary Fund. 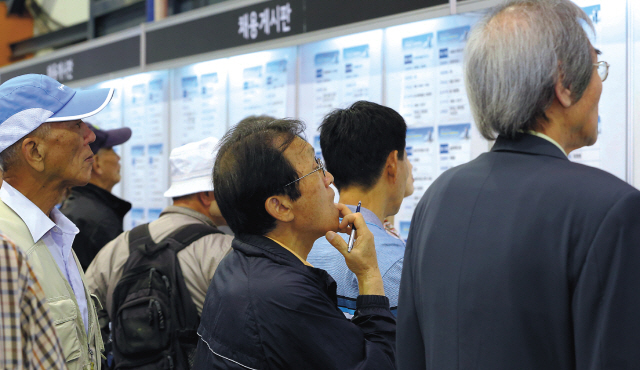 Job seekers look through openings at a job fair for over-55s in Seoul on Sept. 25. (Yonhap News)
From the outside looking in, the economic consensus looks increasingly stacked against the government’s own forecast of 3.3 percent growth for the year, itself a downward revision from earlier forecasts. While the Korean economy continues to outperform most developed economies at a time of global uncertainty, a 2.5 percent expansion would be the smallest since the height of the global financial crisis in 2009.

Acknowledging the deteriorating conditions, the Bank of Korea last week promised to direct policy at reviving the economy. The announcement was widely interpreted as a prelude to a cut in interest rates at the central bank’s next meeting on Thursday. Lower interest rates make borrowing cheaper, which, in theory, can boost growth rates

“(The) Korean interest rate is relatively high compared to other developed countries. Actually the market expected that the central bank would lower the interest rate. It is a very simple measure that Korea can take,” Park Bok-yeong, the director of the Department of International Economy at Korea Institute for International Economic Policy, told Voice.

Some within the BOK itself, however, have lowered expectations of the effectiveness of a rate cut. An unnamed policymaker at the central bank was quoted earlier this month as saying that monetary easing might have little impact given the scale of the global economic slump. If monetary measures are not viable, however, the country’s low public debt means that the fiscal side provides another credible option, said Park.

“Korea’s debt (to GDP) ratio is still low and in that sense Korea has room to expand its fiscal expenditure,” Park said, adding that he favored greater spending over reduced taxes out of concern for economic equality. “In Korea, the more important concern is income inequality and the uneven distribution of the tax burden across business sectors and classes.”

Other analysts see more fundamental problems with the Korean economy that must be addressed for strong growth to resume. The dominance of the chaebol coupled with risk-averse graduates’ desire for security has resulted in a relative dearth of new start-ups compared to other developed countries.

According to the World Bank, Korea registered just 1.72 new businesses per 1,000 people in 2008, the last year for which data is available, compared to an OECD average of 5 per 1,000 people. Shin Dong-youb, a professor of business administration at Yonsei University, said that reigniting the entrepreneurial spirit of previous generations is essential to boosting the economy.

“At that time (after the Korean War), a lot of entrepreneurs started their own businesses and then pursued rapid growth and the result is the Korean economy’s current global competitiveness,” said Shin. “Nowadays, the problem is … not many new firms are founded. And even those newly founded firms do not pursue growth. Instead what they do is they pursue survival as small and medium-sized firms in symbiotic relationships with large firms.”

While Korean firms have honed expertise in their respective fields, added Shin, they remain reluctant to take risks to pursue innovation and new businesses. Shin, who recently participated in a forum on reviving the economy with figures from the government, academia and business, said that both government and business had to shift to their focus to developing new business models.

“What we proposed is that all three main economic actors ― young small and medium-sized firms, large firms and government ― all have to shift their focus from making profits within their existing businesses to the pursuit of rapid growth through creating new businesses.”

The economy’s greatest strength, export-oriented manufacturing, might also be one of its biggest weaknesses, as demonstrated by three straight months of a decline in exports amid low consumer confidence worldwide. Kim Chung-ho, a professor of economics at Yonsei University, said that the country’s manufacturing prowess masks a lack of competitiveness in the service sector.

“Korean service sectors such as retail, medical services, education and schooling and the public sector are lagging behind relative to the manufacturing and construction industry,” said Kim. “They make up more than 70 percent of the Korean economy in terms of employment.”

According to the OECD, productivity in the service sector is about half of that in manufacturing. Restrictions in the sector also contributed to Korea receiving the third-lowest amount of foreign direct investment as a percentage of GDP in the OECD in 2010. Greater liberalization of services, said Kim, would contribute to stronger economic growth in the future.

“(The) main reason for their backwardness is that they are protected from new entrants and foreign competition. In order to boost growth of the Korean economy, liberalization of the service sectors is inevitable.”

The KIIEP’s Kim suggested a smarter approach to the exporting at which Korea has excelled, especially in relation to China, the country’s biggest trade partner. As a rising market of over 1 billion people, China offers a huge potential for exporters to offer finished products instead of solely the more commonly exported components.

“Most of Korea’s exports to China are involved in processing parts,” said Kim. “Those parts are reprocessed in the Chinese market and exported to advanced economies.

“Rather than depending on such a mechanism, Korean exports should be oriented to the Chinese domestic market. Then we can more actively and more stably use the Chinese export market.”

Don’t follow the rest of the world, cutting taxes or pumping in money (usual supply-side versus Keynesian strategy choices, etc.). Domestic consumer spending is way down, but you don’t want to encourage that too much, as the high level of household debt is going to be a disaster in the future.

So, instead, it’s the perfect time for the government to start thinking long term. Let’s follow up on the president’s statement about not everyone needing to go to university. How about implementing something like Germany’s “school-to-work” program? Keep investment high (it’s supposed to be around 5 percent of GDP according to the government) but realize that most of this investment is directed toward capital-intensive (non-labor-intensive) industry.

Let’s remember that Korea’s an export-dependent economy (over 50 percent of GDP made up of exports of goods and services), like China, so its economic growth is to a large extent exogenously determined. Korea’s not America (which depends only 10-15 percent on exports). So, it’s time to be honest ― there’s not a lot the Korean government can do, or should do, but they should focus on the long term, focus on attracting more foreign direct investment, partner schools with corporations, improve investment (bring it to at least 5 percent of GDP) in R&D.

I wouldn’t mess with the fundamentals of fiscal and monetary policy just because people are restive ― it will probably only do more ill than good.

The main drag on the South Korean economy is the high price of housing. The next administration should focus on making more affordable home ownership available to younger Koreans.

The way to boost the economy right now is the popularity of Korean pop music. The Korean music industry is rapidly spreading around the world which is getting foreigners excited to learn about Korean culture as well as the language. From around the world, not only in other areas of Asia, Europe and the United States are getting addicted to the K-wave invasion. This is a good thing because this will absolutely boost the economy of South Korea. Not only the economy, but tourism as well.

The reason why tourism will go up is because more foreigners will want to either go to South Korea to find work or vacation. Another reason on how the Korean pop industry will help boost the economy is that more people will purchase the artists albums and lots of purchases and funds will go towards the country; not only the artists and the agency. Thanks to social media such as Facebook, Twitter, Me2Day and YouTube, the South Korean artists are getting known due to their music videos being posted on YouTube. Not only that, but by news media and Korean news sites that are translated to English. Another issue to consider that will help the economy is exporting.

South Korea can export their electronic products to other countries which in-turn can benefit the companies by making profit. Right now, the country is exporting Samsung electronics to other countries which is in-turn helping and benefitting the Samsung companies in South Korea. There are so many ways that the country of South Korea can boost their economy and these are just a few of the areas.

Psy has one song that is popular because of the humor of the video. Visual humor transcends language. Non-English songs rarely become popular and unless something drastic changes, K-pop will remain a non-American phenomenon. It is a shame really. There are plenty of talented musicians that simply will not get air time because people like to sing along.

“Gangnam Style” is different. It’s funny and has a slight satirical edge. Most K-pop is neither ― it’s not funny and there’s no message at all. It only appeals to people who like the looks and the dancing. 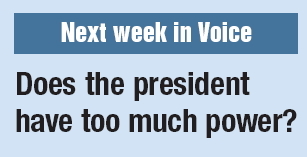