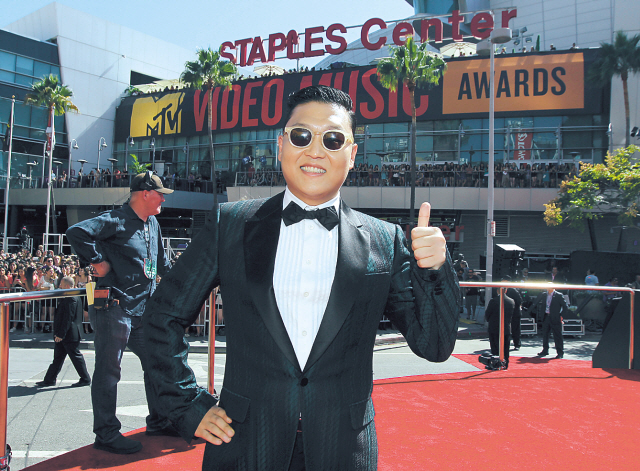 “It really is a big triumph that a Korean song has broken into the iTunes top 10 chart, which controls 80 percent of the online music market share in the U.S.,” said Psy’s local agency YG Entertainment.

“It’s going to be difficult for any Korean artist to break Psy’s record (on iTunes’ chart).”

The 34-year-old, whose title track of his latest album “Gangnam Style” has received enthusiastic reviews worldwide since its release in July, flew to the U.S. last week after announcing his deal with the U.S. label.

He attended the 2012 MTV Video Music Awards, and made an appearance as a surprise guest on NBC’s popular talk show, the Ellen DeGeneres Show. He gave a dancing lesson to DeGeneres and pop star Britney Spears on the set, teaching them how to do the famous “horse riding” dance from the music video.

Psy is to make another appearance on the Ellen Show as a main guest sometime next week.

Meanwhile, U.S. magazine Time also featured the term “Gangnam Style” as part of its “Weekly Highlight of Our Vocabulary” on Thursday.

The magazine defined “Gangnam Style” as a “manner associated with lavish lifestyles in Seoul’s Gangnam district,” and that it has become increasingly popular after the release of Psy’s YouTube music video. The song’s horse-riding dance has made K-pop “the toast of trend-watchers,” the magazine said.

The “Gangnam Style” music video on YouTube has received more than 150 million hits so far.