[ The Korea Herald – Send E-mail ]
Viral music video gives Psy global pop culture moment
By Korea Herald
Published : Aug 24, 2012 - 19:54
Updated : Aug 24, 2012 - 19:54
NEW YORK (AP) ― Korean rapper Psy ― who is having a pop culture moment with his viral music video for “Gangnam Style” ― says he’s been doing funky choreography for a decade in his native Korea. But he’s excited his colorful style is being celebrated in the United States, and around the world.

“I did a lot of strange dance moves for 12 years in Korea,” Psy said in an interview Wednesday, adding that the reaction today reminds him of his musical debut back home. “This is kind of (the) same story.”

The music video for “Gangnam Style,” released last month, so far has garnered more than 49 million views on YouTube. The bright, vibrant clip features the comedic and flamboyant Psy delivering somewhat bizarre choreography ― including a horse-riding dance ― while rapping and singing in Korean over a thumping, dance-flavored beat. The video, full of colorful, lively outfits, includes a mob of dancers backing Psy and the only words he says in English are “Hey, sexy lady.” It’s currently No. 1 on iTunes’ music videos chart. 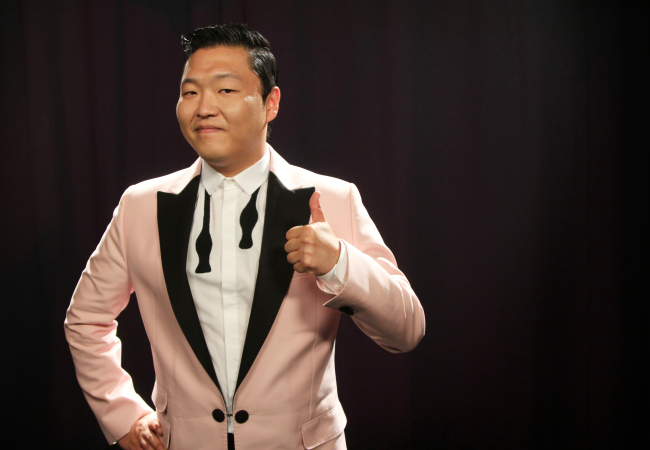 This Aug. 22, 2012 photo shows Korean rapper Psy posing for a photo in New York. (AP-Yonhap News)
“The thing is, I have special visuals. I’m not like (a) normal entertainer (when it comes to visuals),” he said. “That’s why when I dance it looks different. I have a different body, different shape, different visuals.”

The 34-year-old, born Park Jae-sang, is a widely famous star in Korea, and is enjoying his U.S. breakthrough. His stage name is derived from “Psycho” and he writes and produces his own music. “Gangnam Style” is about the lavish and luxurious lifestyle connected to the trendy Gangnam district, located in Seoul. Psy even choreographed the routines in the clip.

“In Korea they’re celebrating me because I didn’t try anything. I didn’t promote, I didn’t target anything about going overseas,” he said. “It just happened like this with YouTube and Twitter. I think those two feed me.”

“Years ago we talked about this great, democratizing force the Internet was going to be, and it would strip down nationalities and barriers and boundaries, and this is a great way of that happening,” said Bill Werde, the editor of Billboard. “In some ways it’s very simple. There’s no great science behind it. Someone saw a video that they loved and they shouted about it.”

Of millions watching the viral video, there are a growing number of celebrities expressing their love for the song, including Katy Perry, T-Pain, Robbie Williams, Josh Groban and Nelly Furtado, who performed some of the song at a recent concert.

“When I realized that some top stars like have imagined or tweeted about me, I thought like, ‘That’s joking ... That’s not gonna happen,’” he said. “I never expect things like this, not because they are top stars but because this is the biggest market in the universe for pop music, right, so everybody’s dreaming about having appearance in the U.S. so I’m still saying. ‘What am I doing ... here? This is beautiful.’”

“Gangnam Style” appears on Psy’s sixth studio album, “Psy 6.” He had a meeting with Justin Bieber’s manager, Scooter Braun, last week. But the singer-rapper was tight-lipped about the get-together.

“He doesn’t want me to talk about our relationship yet so, what can I say?” Psy said, adding with a laugh: “He’s a nice person.”

The chubby musician is finding success at a time when K-Pop, Korean pop music, is growing in the United States. But Psy, whose song is spending its fourth week on top of Billboard’s K-Pop Hot 100 chart, says he doesn’t fit the typical mold of most K-Pop artists, and he’s OK with it.

“There are standards, like skinny, muscular, handsome, pretty, tall, whatever, none (of those) categories belong to me,” he said with a laugh.

Psy was born in Korea, but briefly attended Boston University and Berklee College of Music. He released his debut “Psy from the Psycho World!” in 2001, and said his musical influences are mainly rappers, like Eminem, 2 Pac, Jay-Z and Dr. Dre.

“When I was a kid I was just a noisy boy and I preferred to be in front of people when I was young all the time,” he said. “At that time I was not a good singer; still I’m not a good singer. So, when I see the rappers (I thought), ‘Oh, talk can be music? Wow. That’s for me.’”