Failing to bear corporate social responsibility ethics among foreign luxury brands has prompted criticism from both consumers and the business community.

Many luxury brands reaped huge success in Korea apparently thanks to price increases and cutting down commission fees for the nation’s major department stores.

According to Yonhap News, these companies have been transferring home about 50 percent of their earnings, with little CSR activities for the local community. Some companies reportedly send up to 90 percent of the profit to their home countries.

According to the FSS, a state-run financial watchdog, Richemont Korea saw a massive 38 percent sales growth in the latest fiscal year between April 1, 2011, and March 31, 2012, raking about 335.9 billion won in sales.

Richemont Korea has marked a growth rate in the 30 percent range every year with multiple subsidiary premium fashion brands such as Cartier, Montblanc, Piaget and Vacheron Constantin. 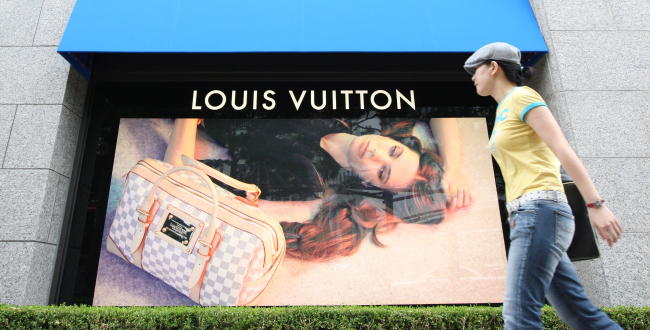 A woman walks past a department store in Seoul. (The Korea Herald)
The luxury goods giant’s 1.57 million won charity donation pose a sharp contrast to its 15.4 billion won operating profit and 12.3 billion won net profit, according to sources.

Richemont Korea told The Korea Herald that the company does charity work for children from time to time on an individual basis, but declined to disclose any information about the company’s CSR program.

The Swiss luxury giant is second among global luxury goods companies after LVMH, or Louis Vuitton S.A., in both the international and Korean luxury brand markets.

Louis Vuitton Korea said the company was rather late in joining the CSR movement but plans to make open promotional activities for charity works in the future. The company claimed that it began making donations to three SOS Children’s Villages in Seoul, Suncheon and Daegu, which are group homes dedicated to orphans.

The company donated funds to build a children’s library and organize summer camps for children in these charity homes in addition to a car presented to the village in Suncheon.

The Korean unit of the world’s No. 1 luxury brand declined to reveal the total amount of the charity fund. The company reportedly donated about 200 million won according to chaebul.com, which accounts for only 0.18 percent of its profit.

Gucci Korea made a profit of 296 billion won during the fiscal year, without noticeable CSR or charity donations.

“I think it is just the news agencies making a big issue out of things like this,” said an office worker who once worked at a luxury goods company. She said donating should be left to voluntary choices.

Consumers’ responses, however, were mostly negative to the fashionable but miserly companies.

“I am upset (about the news). I don’t feel like buying another product from these brands when I think about the matter from a consumer’s angle,” said Lee Han-na, a 25-year-old English tutor who owns multiple bags from Gucci and Louis Vuitton.

“These luxury brands are making a huge profit especially in Korea, and it is natural for customers to get discouraged from purchasing when they find out how they do zero CSR like this.”

Some domestic companies also voiced that that foreign companies should not be such evasive in sharing with the community.

“Business works rely on capitalist values by and large, but seeking profit without contributing to the community is hardly justified these days,” said a spokesman of a major Korea-based export-intensive company that refused to be named.

“It could be a culture thing. Korea has developed a business environment where the reputation of chaebols and leading figures represent their companies’ brand image,” the spokesman said, implying CSR has became a fundamental part of the Korean corporate culture generating harmonious relationship with the community.