She agreed to make the trip after learning about Jeju Furey and deciding to support the cause.

The charitable group was set up in 2009 in memory of English teacher Nathan Furey, who died while living on the island in what is thought to have been a sudden case of encephalitis.

The foundation has already raised more than 20 million won ($18,000), which has been donated to support Nathan’s two sons’ post-secondary education, and also to help low-income families on the island. 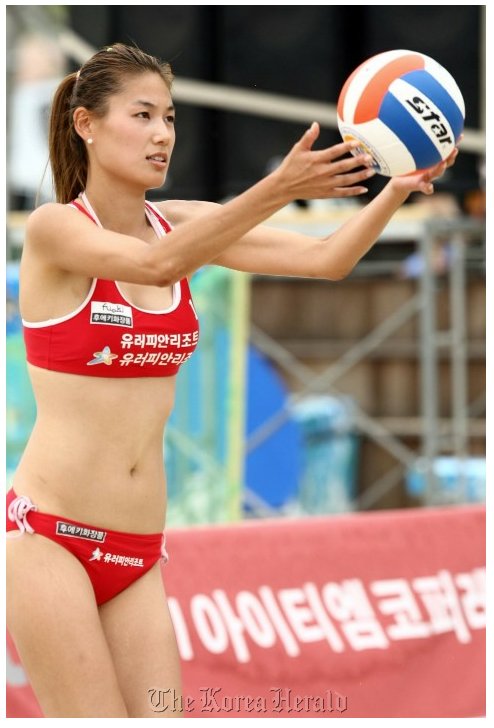 Han Ji-yeon
Han will travel from Seoul to spend four days giving advice to any Korean women of high school age or older interested in the sport from 5-7:30 p.m. on July 18-22.

There are 24 spots for each day, and participants do not have to attend all four days or even all of one session to join the event.

There will also be a beach volleyball tournament following the clinic on July 22. The tournament is open to all for a participation fee of 10,000 won when booking before July 8, and 15,000 won for those booking after that date.

Teams must be made up of three men and three women, with all teams guaranteed four matches.

Participants in the clinic do not have to participate in the tournament unless they wish to.

“We really want to give more Korean girls and women a chance to play sports in general and beach volleyball in particular. This is one of the two groups of people that can really help Jeju Furey grow,” said Daniel Nabben.

“Han Ji-yeon will be playing in this tournament and our hope is to give her a taste of what the May and October tournaments are like so that she’ll return for future tourneys and maybe even bring a bunch of others with her. People from the mainland form the other group that can really help Jeju Furey grow.”

Those interested in taking part in Han’s sports clinics can register at http://jejufurey.weebly.com/5466549324.html.