North Korea’s new leader Kim Jong-un appears to be more active in the consideration of economic reform and openness despite rampant skepticism about his willingness for change, a local expert claimed.

Citing recent remarks by the fledgling leader and media reports, Cheong Seong-chang of the think tank Sejong Institute said there have been notable indications that Pyongyang is seriously considering the need for an open-door policy.

After the death of the reclusive autocrat Kim Jong-il last December, the presumption has prevailed that Pyongyang would continue to uphold his legacy, given that the ruling elites favor the status quo and fear reform could lead to the regime’s collapse. 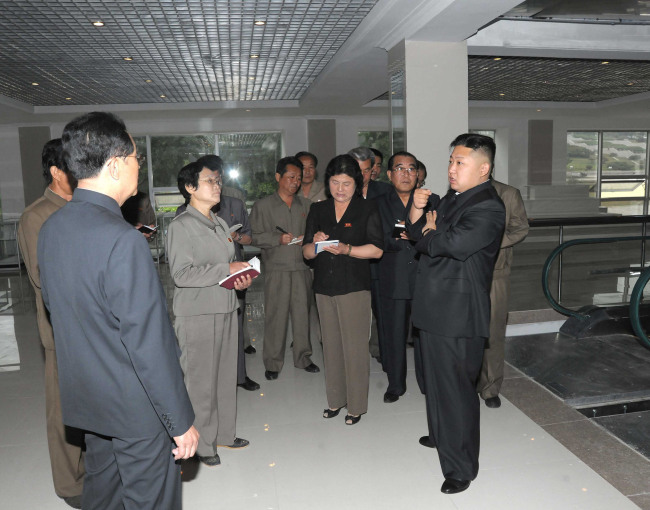 North Korean leader Kim Jong-un visits a new department store for children’s goods in Pyongyang in this undated photo. (Yonhap News)
But Kim’s experience in studying and traveling abroad ― and his firsthand look at the abject poverty his people are suffering from ― might have made him more interested in an economic overhaul, Cheong said during a North Korea policy forum in Seoul on Monday.

Cheong paid particular attention to the comments Yang Hyong-sop, vice chairman of the Supreme People’s Assembly, made in a rare interview with the Associated Press on Jan. 16.

Yang, a member of the powerful politburo of the communist state’s ruling Workers’ Party, reportedly said the new leader is focusing on creating a “knowledge-based” economy and is studying cases of economic reform in other countries, including China.

“In the past, it was utterly unthinkable to publicly reveal to the Western media that its leader is studying the issue of economic reform, to which the North Korean leadership including Kim Jong-il had shown a strong aversion,” said Cheong.

“During the Kim Jong-il era, it was a very dangerous thing for any power elite to mention reform or openness in public.”

For the Swiss-educated leader thought to be in his late 20s, one of the major tasks in the process of consolidating power is to shore up the economy and secure firm public support for his leadership.

Pyongyang has so far moved deeper into international isolation due to sanctions for its pursuit of nuclear arms and continuing saber-rattling including the botched rocket launch in April. Thanks to the sanctions and severe droughts, its food shortages have seriously worsened, prompting more people to opt to cross the border into China.

For another sign of the North’s willingness for reform, Cheong pointed to the revision of the seven regulations for foreign investors, which was made on Dec. 21, just four days after the former leader passed away.

The revision came while the entire state mourned the death of his father. This apparently signaled that Kim is willing to push for the policy to attract foreign investment, Cheong said.

After his father suffered a stroke in the summer of 2008, Kim was internally tapped as his successor. He has since been deeply engaged in the management of state affairs, he noted.

The revised regulations concerning the operation of foreign enterprises and investors include ones on taxes, accounting, labor management and registration.

After he took the helm of the country, Kim, first secretary of the ruling party and first chairman of the National Defense Commission, has assumed a leadership style that is different from his father ― a coercive leader who was rarely in direct contact with ordinary citizens.

Indicating that he cares more about his starving people, the junior Kim has tried to reach out to the grassroots that have held a strong nostalgia for his grandfather and more embracive leader Kim Il-sung.

Signs of North Korea focusing more on the livelihoods of its people were detected in its state media’s joint New Year editorials published in recent years.

The number of the “light industries” and “consumer products” mentioned in them has significantly increased in recent years while mentions of “military first” have substantially decreased.

In Kim’s remarks that were revealed by the Rodong Sinmun, the official daily of the North’s ruling party, on May 9, the new leader even encouraged ranking officials to use the Internet for research and exchanges of information. This move is apparently a significant step toward an open-door policy, Cheong noted.

“As I already said, through the Internet, we should help (people) look at international trends and materials on other countries’ advanced science and technology, and need to send our delegation to other countries to have them learn from them and collect their materials,” he was quoted as saying in the newspaper.

Cheong said that above all, North Korea should clearly understand the hurdles the socialist system has on its way to reform, and that its leadership should mobilize to overcome possible lapses expected in the process of the possible reform.

He also stressed that the North should make efforts to normalize ties with the U.S., South Korea and Japan to forge a condition conducive for foreign investment and economic prosperity.

In February, signs of a thaw in the relations between Washington and Pyongyang were detected as the North signed a deal to put a temporary moratorium on missile and nuclear tests in exchange for 240,000 tons of nutritional assistance.

But the reconciliatory mood was broken after the North breached the deal by launching a long-range rocket, which it claimed was aimed at putting a scientific research satellite into orbit.