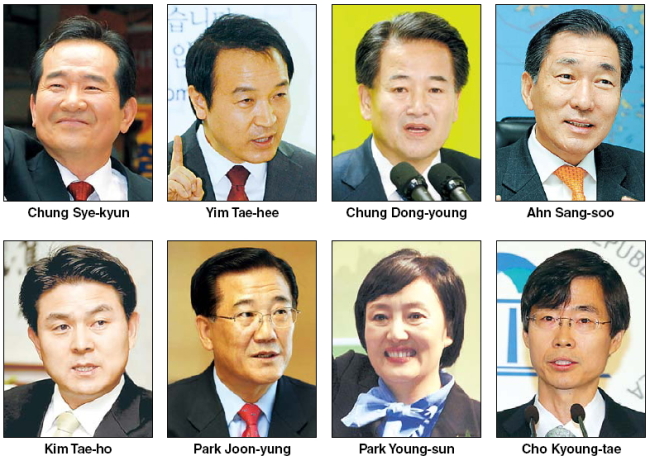 
A myriad of fringe candidates are joining the race toward the December presidential election in the hope of reshaping politics despite being overshadowed by high profile figures and having minimal public support.

The peripheral candidates may be overestimating their chances, laying the groundwork for a distant bid, or even simply trying to spruce up their political resume, observers said.

“Whatever their intention may be, an excessive number of candidates could entail downsides in a country where there are fewer distinct policy inclinations between rival parties,” said politics professor Yoon Seung-yi of Kyung Hee University.

Except for Park, none of them poll above 5 percent.

In the main opposition Democratic United Party, the number may well exceed eight. Moon Jae-in, the frontrunner and former chief-of-staff to late President Roh Moo-hyun, along with former Gyeonggi Gov. Sohn Hak-kyu and Rep. Cho Kyoung-tae have so far announced their bids.

Chung Sye-kyun is the latest to join them, having announced his bid Tuesday at Gwangjang market in Jongno, Seoul.

“The more candidates there are, the harder it will be for the race to revolve around the competition of policies. The weaker the candidate is, the higher the chance the candidate will resort to negative campaigns,” Yoon said.

Side effects are already showing at the crowded platform at the Saenuri Party, with the underdogs vowing to ditch the primary altogether in protest against Park Geun-hye and the leadership’s refusal to change the primary rules.

From the party’s point of view, on the other hand, a bigger crowd of competitors is hoped to bring wider public attention. Some also cite the successful primary that elected late President Roh Moo-hyun as the Democratic Party’s presidential candidate in 2002 ― an unexpected outcome widely attributed to Roh’s relative youth and reform-orientated initiatives against then-Grand National Party frontrunner Lee Hoi-chang. His campaign also broke the regionalist voting patterns that had been expected to benefit internal rivals and political heavyweights Lee In-je and Hahn Hwa-kap.

“There will be at least three or four more waves (of drastic political events) during the next six months until the presidential election. The final selection of the party candidates as well as how the contenders form alliances among each other will be one such huge wave,” DUP chief Lee Hae-chan told reporters Monday.

Indeed, the DUP is determined to have a “box-office hit” against the Saenuri Party by rearranging its primary schedule to begin after the London Olympics in August, while denouncing the ruling party’s “predictable shoo-in of Park Geun-hye” as their final opponent.

The number of fringe candidates winning less than 1 percent of the vote in the presidential election has gradually increased since 1987 when direct elections were introduced.

“As factional politics of the past dwindled with the retirement of political heavyweights, there have been more perennial candidates jumping in the race in the hope of solidifying their political clout,” Yoon said.

In 2007, for instance, a total of 12 candidates ran in the presidential election in comparison to an average of seven to eight in the past. Two of them withdrew before election day while five received between 0.03 percent and 0.7 percent of the vote.