Donors have rallied to raise a massive sum to help a Yeosu-based English teacher return to his native U.S. for cancer treatment.

Almost $11,700 has been donated to a fund-raising website to support Tyler Schroeder in the weeks since he was diagnosed with a rare form of cancer.

The 25-year-old had been living and teaching in Yeosu for almost two years when he visited a hospital in Seoul in early May, complaining of back pain.

Tests revealed that the pain he had initially put down to a slipped disc was being caused by a malignant tumor on his vertebrae. Tyler was diagnosed with the extremely rare primitive neuroectodermal cancer on May 15. 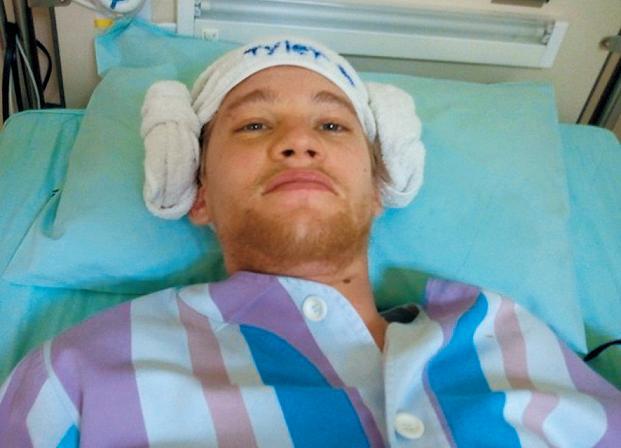 Tyler Schroeder rests in a Seoul hospital before flying back to the U.S. to receive specialist cancer treatment
He required immediate surgery to relieve the pain, and was admitted to the Wooridul Spine Hospital in Seoul. His parents Jody and Rusty flew from his home state of Iowa to be with him.

He soon went under the knife again to reduce a buildup of liquid around the affected area. But doctors recommended he return to the U.S. He flew back on May 29 to attend the Mayo Clinic in Minnesota.

Friends had not been told the exact form of treatment that would await him there, but said that a mix of chemotherapy, radiation therapy and more surgery were all likely.

His best friend Talia Robinson said that the trip back would have been much more difficult without the help of his friends and strangers. They flocked to donate via the “Tyler Fund” website that she set up for him on Indiegogo. The site mostly raises funds for artistic projects, but is also used on occasion for social causes. 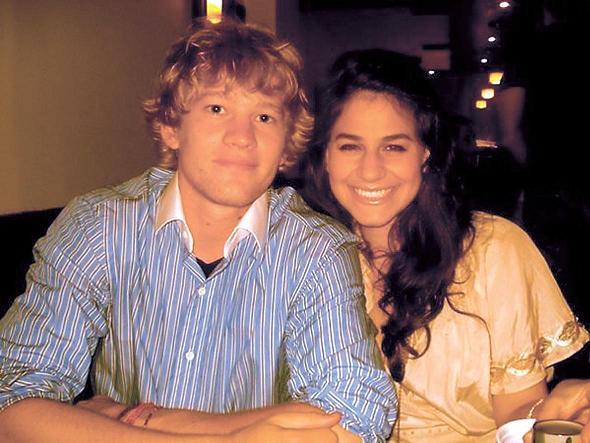 Tyler Schroeder enjoys time with his friend Talia Robison before he was diagnosed with cancer.
Writing on the webpage from the hospital, Tyler said he found it “difficult to comprehend” such generosity and why a “simple farm boy from Iowa would deserve such empathy.”

He added: “Whether we have been life-long companions or merely met in passing, your benevolence has lifted the spirits of a human in despair.

“Looking over the activity already taking place within this foundation prompts me to want to nothing more than to embrace and shed a tear with each of you selfless individuals.

“Never in my life have I witnessed such whole-hearted compassion from such a community. Not a day will go by where I won’t give thanks for the gratitude each of you have extended … Your unique reaction has truly changed my life.”

Fundraising events are now being planned by Tyler’s friends in New York City, Iowa and Korea.

For more information go to: www.indiegogo.com/thetylerfund.