Noritaka Tatehana is the man behind Lady Gaga’s towering, cloglike shoes, which have no heel and are 25 to 46 centimeters (10 to 18 inches) tall. Her appearances on TV shows and music videos, teetering in his creations, have helped make him such a fashion star that some of his shoes sell for more than $15,000 a pair.

Tatehana, who has made more than 20 pairs for Lady Gaga over the last two years, said he took the traditional “geta” shoes of geishas and made a modern form with his sculptural platforms. 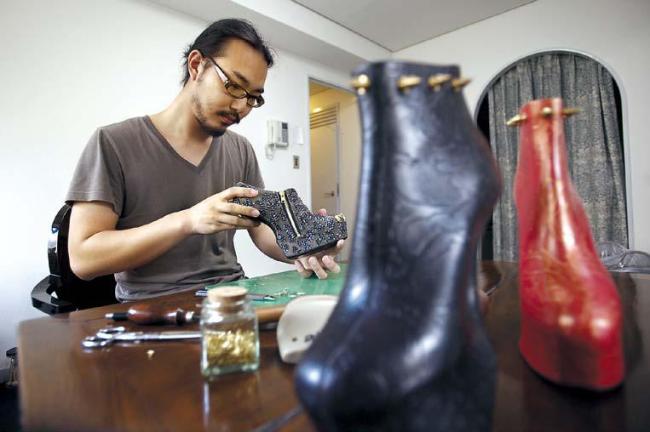 Japanese shoe designer Noritaka Tatehana works in his office in Tokyo. (AP-Yonhap News)
”My work became an icon. It worked not only as branding for me. It also became part of her branding,” Tatehana said in a recent interview at his Tokyo workshop, cluttered with art books and his sleek shoes -- some glittering with Swarovski crystals, others with golden studs.

The 26-year-old, who resembles a monk with his quiet voice, long hair tied back in a bun and baggy Yohji Yamamoto pants, was still a student when his career took off. In fact, Lady Gaga’s first pair of Tatehanas had been the subject of his graduation thesis at the prestigious Tokyo University of the Arts, where he studied traditional weaving and kimono dyeing.

He made the shoes with pink, reptilian-looking leather from a stingray, common in Japanese crafts such as decoration for swords. He started his fashion brand by trumpeting the design in an email he sent to dozens of people in the industry.

He received just three responses: one from a blogger, one from a journalist, and one from Lady Gaga’s stylist. 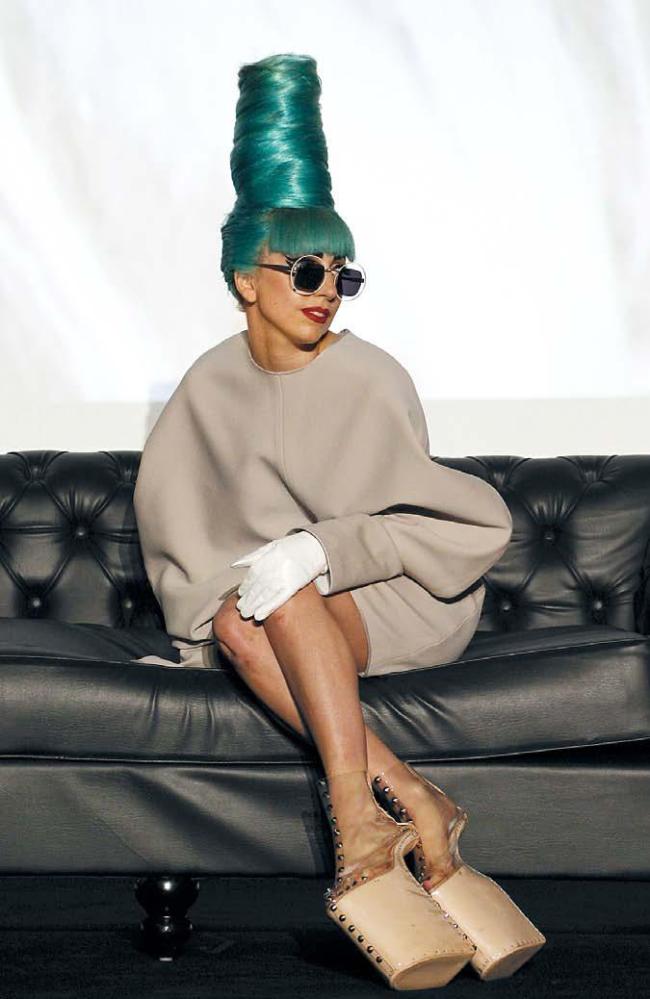 Lady Gaga gives a press conference ahead of a 2011 showcase concert wearing shoes created by Japanese shoe designer Noritaka Tatehana at the Marina Bay Sands in Singapore. (AP-Yonhap News)
Lady Gaga was not available for comment. But fashion guru and beer heiress Daphne Guinness said she is a big fan.

”I am so happy to have a friend who speaks the same language as me -- not English or Japanese, but the language of art, which transcends linguistics,” Guinness said. “He is truly a unique talent.”

Valerie Steele, director and chief curator of the Museum at the Fashion Institute of Technology in New York, which has exhibited Tatehana’s work, said she hopes Tatehana eventually makes a more affordable line.

”Noritaka Tatehana is one of the most important shoe designers of our time,” she said. “His amazing, vertiginous heel-less high-heeled shoes have transformed the look of extreme footwear.”

The custom-made shoes look like the furthest thing from sensible; even Lady Gaga has occasionally lost her balance in some of the taller designs. But Tatehana said they’re actually more comfortable than regular high heels because they put the wearer’s weight on the toe rather than the heel.

Tatehana says he can even run in his creations, though he prefers to wear sneakers and loafers.

Tatehana grew up on the seaside resort of Kamakura. His father used to run a downtown Tokyo public bathhouse that has since become prime office real estate, and his mother teaches doll-making.

He says he would like someday to expand into clothing, maybe bags, or to work in costume design for films. He also wants to help raise the profile of his heritage around the world.