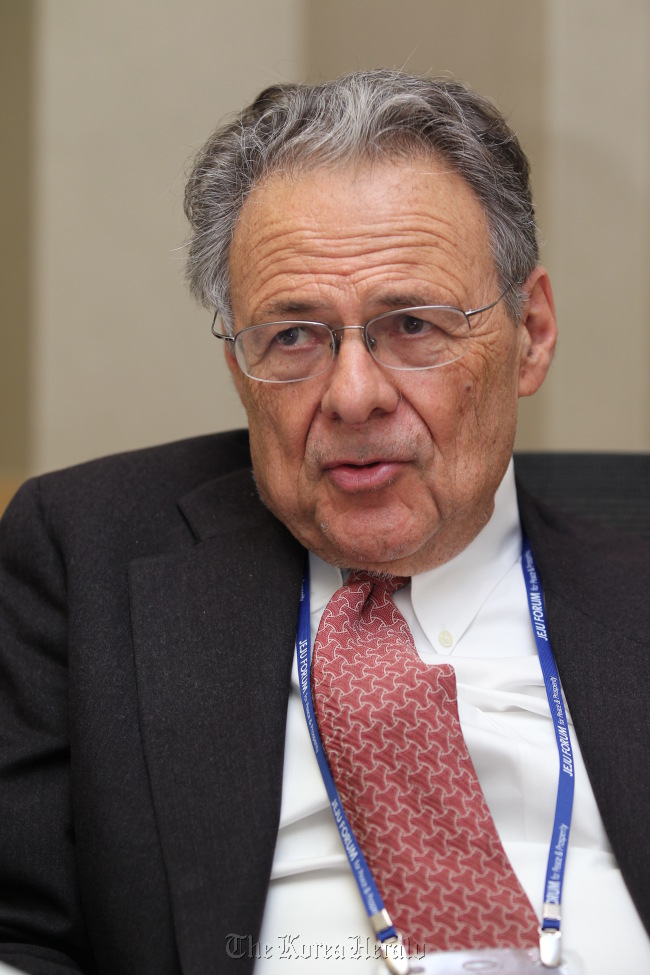 “The Republican Party has always had a romance with tactical nuclear weapons. They have always seen them as a way to reduce the need for manpower and to reduce the size of the budget,” Morton H. Halperin, former U.S. undersecretary of defense for policy, told The Korea Herald last week.

Halperin, currently a senior advisor at the Open Society Foundations, was here last week to attend the 7th Jeju Forum for Peace and Prosperity on the southern resort island. The three-day international forum ended on Saturday.

As North Korea has been pursuing nuclear warheads and delivery capabilities, a debate here over the need to draw up measures against it has been reignited.

One of them was to revise a Seoul-Washington agreement that bans Korea from developing a ballistic missile with a range of longer than 300 kilometers. Halperin said the range extension will not be easy.

“It is going to be difficult. I think the issue of Korea deciding that it uses a nuclear option to deal with North Korea is a potentially most explosive issue in the relationship between the U.S. and Korea,” he said. “I think we need to find a creative way to deal with it including continuing to make efforts to persuade North Korea to denuclearize.”

Asked whether Korea’s military should also pay more attention to potential threats from neighboring states such as China and Japan given it has focused primarily on deterring North Korea, Halperin said that those states will not pose any military threat to Korea.

As China and Japan have constantly challenged Korea’s sovereignty to Ieodo, south of Jeju Island, and its easternmost islets of Dokdo, respectively, security experts here have called for strengthening naval defense.

“It is quite startling how intensely nations fight about trivial pieces of land when they have much larger pieces of land. I think South Korea should focus its military efforts on containing North Korea. I don’t think they will pose a military threat to Korea in any time,” he said.

For such belief, he underscored that power in this modern world comes from economic capability, not from military power.

“It is true that the Chinese military capability has been growing because it has more economic power. But the fact is that China had a nuclear weapon a very long time ago, and nobody paid the slightest attention to it,” he said.

“It (China) was seen to be a great power and becoming a great power when it developed economic capability to influence things around the world through its assistance programs, through its trade through its investment, that is where power is now, it is not in military force.”

He also dismissed concerns that the U.S. could be reluctant to get engaged in another war in Asia, possibly on the Korean Peninsula, due to public fatigue over a decade of war in Iraq and Afghanistan.

“I think people said the same thing at the end of the Vietnam War. They said the U.S. will never go to war again on the Asian continent. That even turned out not to be accurate. American people get over this quite quickly,” he said.

The U.S. has reportedly abandoned its long-held strategy to fight two wars at the same time and adopted the so-called “one plus strategy” in which it fights a war while deterring another. This has triggered concerns over peninsular security.

“I think people see an enormous difference between situations of insurgency warfare in a not very developed country with a worry about the commitment of the people to the government they were supporting. They worry about whether there is a viable political structure in it,” he said.

“That is not at all in the case of Korea. I don’t have any doubt that if there was a war on the Korean Peninsula, which I think is extraordinarily unlikely, that the U.S. will stand with South Korea.”

Asked if he agrees that Korea will become one of the most endangered states should the U.S. security commitment become unreliable amid China’s possible regional preeminence, he said it is unlikely.

In his latest book, “Strategic Vision,” Zbigniew Brzezinski, the former national security adviser to former President Jimmy Carter, listed South Korea as one of the “geographically most endangered states” along with Georgia, Taiwan, Belarus and several others.

“I think that is thinking that comes out of a different century and a different generation. I don’t think the world works that way any more. I think the behavior of state is much more affected by its own people and by its domestic political situation, particularly in a country like Korea, which is now firmly, clearly a democratic state,” he said.

“Moreover, I think that China, for a very long time, will remain focused. I think it has been since the current regime came to power, on its own internal economic development. China is still a very poor country and I don’t think it will seek to dominate the Republic of Korea.”