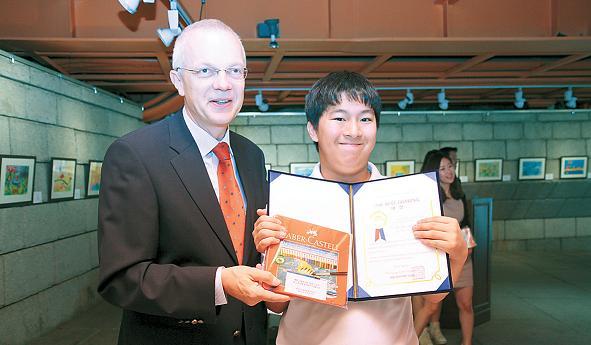 Dutch Ambassador Paul Menkveld presents the award and prize to the winner of the 2012 EKF’s 3rd Autistic Children’s Drawing Contest, Kim Min-seo, on May 26. (EKF)
The Autistic Children’s Drawing Contest, organized by the Europe-Korea Foundation, is being held from May 25 to June 3 at Gwanggyo Gallery, Chunggyecheon in Seoul, in order to raise awareness about autism in Korean society.

The Europe-Korea Foundation previously organized drawing contests for autistic children back in 2008 and 2011. This year’s is the third contest that the foundation has organized to give autistic students the opportunity to express how they view Korea and Korean values.

Almost 200 drawings by autistic kids across the country were submitted over the past two months. Professional artists were then invited to select 50 drawings that best depicted the beauty of Korea. The Europe-Korea Foundation presented awards on May 26 to the winning students to further spotlight their artistic skills and talents.

Dutch Ambassador Paul Menkveld attended the ceremony to congratulate the awardees. He presented prizes to the children, with 14-year-old Kim Min-seo winning the best drawing award with his piece entitled “Haechi in a winter night.”

The exhibition aimed to provide the public with an opportunity to better understand autism in Korean society.

The Europe-Korea Foundation was originally established by the board of the European Union Chamber of Commerce in Korea during the 1997 financial crisis to help the Korean economy recover from the 1997-98 financial crisis. The foundation has contributed in the field of economic cooperation as well as the areas of social welfare and cultural exchange.