The U.S. Defense Security Cooperation Agency said in press releases last week that it had notified the U.S. Congress of the possible sale of 18 of the missiles, eight of the helicopters and their associated parts, equipment, logistical support and training.

The estimated costs are $1.84 billion.

The DSCA said it informed Congress of the proposal after a request by South Korea. 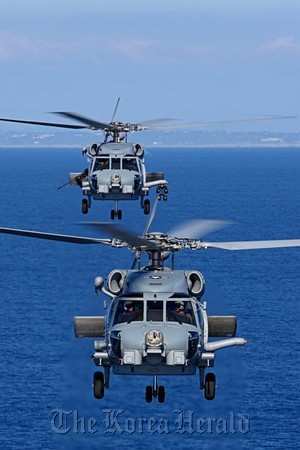 The earlier model, the Harpoon, was introduced in 1977 and has been purchased by American allies including the NATO countries as well as Australia, Japan and South Korea.

The missiles have been bought by 30 foreign navies so far.

It is able to deploy aboard any air-capable frigate, destroyer or cruiser.

The Seahawks will improve South Korea’s capability to meet current and future threats from enemy anti-surface warfare capabilities, according to the defense agency.

The agency also said the proposed sales are consistent with U.S. objectives of developing and maintaining Korea’s strong and ready self-defense capability, which will contribute to an acceptable military balance in East Asia.

U.S. government officials and contractor representatives are expected to make visits to Korea if the proposed sales are implemented.