[ The Korea Herald – Send E-mail ]
Carmakers showcase tech prowess at Busan auto show
By Chung Joo-won
Published : May 24, 2012 - 19:38
Updated : May 24, 2012 - 19:38
BUSAN ― Hyundai Motor Co. introduced five models, including its new Avante Coupe, in the Busan International Motor Show that opened on Thursday, along with an array of automobiles and IT-combined technologies to compete with foreign automakers.

Based on the previous four-door Avante model, Avante Coupe will enter the local market in the second half of the year, Hyundai officials said.

Embracing the slogan “Motor Show that Satisfies the Customers’ Emotions,” Hyundai president Kim Choong-ho said the show, also know as the BIMOS, “is only the start in providing premium value to larger number of customers.” The Avante Coupe will contribute to the company’s expansion in market share with its premiere into the Korean automobile market, the president added.

The auto conglomerate displayed 23 vehicles of 20 models. The automaker held the Asia premier of Avante Coupe and NC and the Korea premier of HND-7/Hexa Space, Avante MD EV and i-oniq HED-8 in BIMOS.

Capable of running purely on an electric power system at the maximum speed of 145 kilometers per hour, Avante MD EV can top 180 kilometers when fully charged.

Hyundai Motor also caught viewers’ attention by introducing the IT controlling system Bluelink, associated with smartphones. By accessing a smartphone app at home, customers can spot, unlock and start their cars that are parked outside. Drivers can also turn on the air conditioner, send directions to the cars’ navigators and receive text messages when people try to break into or damage to the car. 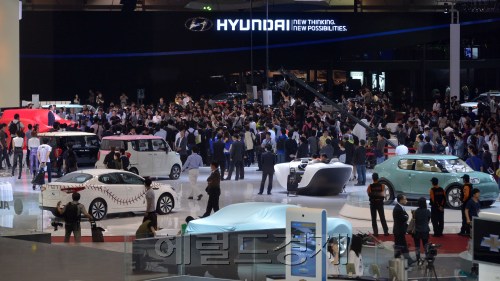 BMW ActiveHybrid 5 is the company’s first model equipped with an electric motor between the engine, an eight-speed automatic and turbo-engine in line-six. Enabled to cover about 2.5 miles without the combustion engine, the hybrid car boasts power-efficiency at 14.2 to 15.6 kilometers per liter and low emission rate of carbon dioxide at 149-163 grams per kilometer.

About Kia Motors Corp.’s earlier statement that its K9 premium luxury sedan seeks to stand on the equal line with BMW and Mercedes, BMW Korea president Kim Hyo-joon that he was simply delighted. “Such a statement proves that we are the number one. Being a leading figure entails benchmarking by one’s followers.”

Mercedes-Benz unveiled its new premium SUV series, M-Class, which had not yet been introduced in Korean automobile market. The SUV maintains powerful performance while reducing fuel consumption, the automaker said.

In particular, Mercedes’ new ML 350 BlueTEC 4MATIC model applies selective catalytic reduction technology, an advanced form of new clean diesel technology called BlueTEC. The automaker said that the premium SUV can save energy consumption by up to 17.8 percent and has a low emission rate of 201 grams per kilometer.

With a multitude of fuel-saving vehicles being introduced in Korea, BIMOS 2012 closely resonates with the futuristic eco-friendly movement.

International automakers convened for the opening day of the sixth BIMOS to compete over larger share in Korean automobile market.

On top of performance and design, fuel-saving efficiency is the common ground rule among the automakers’ strategies. Out of 22 automaker and commercial vehicle makers, 17 participated in the BIMOS 2012 Press Day which took place a day before the opening day.

Held under the theme “The Voyage of the Green Car across the Ocean,” the international auto convention features environmentally friendly vehicles reflecting the “green-car” trend in Korean automobile industry.